Oxbow Creek (also known as Hortons Creek) is a tributary of Tunkhannock Creek in Wyoming County, Pennsylvania, in the United States. It is approximately 2.5 miles (4.0 km) long and flows through Lemon Township. The watershed of the creek has an area of 8.56 square miles (22.2 km2). The creek has two named tributarie: Horton Creek and Oxbow Inlet. It is not designated as an impaired waterbody. The surficial geology in its vicinity mostly consists of Wisconsinan Till, alluvium, Wisconsinan Ice-Contact Stratified Drift, and bedrock.

The area near the mouth of Oxbow Creek was settled before 1800 and some mills were constructed on it in the 19th century. A number of bridges have also been constructed across the creek. Its watershed is designated as a Coldwater Fishery and a Migratory Fishery. 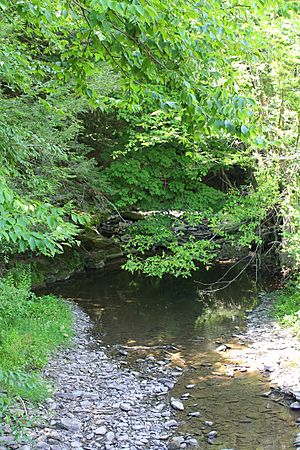 Oxbow Creek is not designated as an impaired waterbody.

The surficial geology near the mouth of Oxbow Creek mainly consists of alluvium. Slightly further upstream, there is still some alluvium, but also a till known as Wisconsinan Till, and bedrock consisting of sandstone and shale. In the vicinity of the creek's upper reaches, the surficial geology mainly consists of Wisconsinan Till, although there is some alluvium and a patch of Wisconsinan Ice-Contact Stratified Drift near the confluence of the tributary Horton Creek.

The designated use of Oxbow Creek is aquatic life.

In August and September 2011, Oxbow Creek experienced significant flooding, which caused streambank erosion. To protect against such occurrences in the future, large rocks of riprap were installed along that reach of the creek. 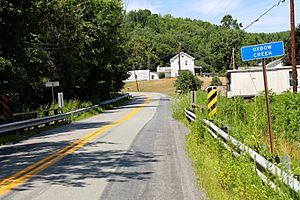 Oxbow Creek was entered into the Geographic Names Information System on August 2, 1979. Its identifier in the Geographic Names Information System is 1193074. The creek is also known as Hortons Creek. This variant name appears in Israel C. White's 1883 book The geology of the North Branch Susquehanna River Region in the six counties of Wyoming, Lackawanna, Luzerne, Columbia, Montour and Northumberland.

The early settlers in Lemon Township were people who came from Orange County, New York before 1800 to the mouth of Oxbow Creek. A number of sawmills were constructed on the creek in the 1800s. However, in 1868, heavy rains destroyed most of the mill dams on the creek. In 1879, W.S. Shaw constructed a circular saw and lath mill on the creek.

The drainage basin of Oxbow Creek is designated as a Coldwater Fishery and a Migratory Fishery.

All content from Kiddle encyclopedia articles (including the article images and facts) can be freely used under Attribution-ShareAlike license, unless stated otherwise. Cite this article:
Oxbow Creek Facts for Kids. Kiddle Encyclopedia.