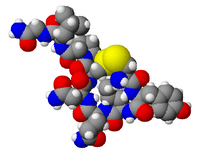 A computer model of an Oxytocin molecule 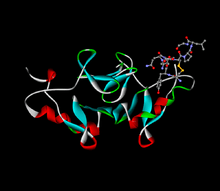 Oxytocin is a hormone found in mammals. It acts on the brain. In humans it is released during female reproduction, especially during and after childbirth.

It has other effects. It encourages pair bonding, and parental behaviour. It is often called the 'love hormone'.

Strange to say, the oxytocin released by the pituitary gland cannot reach the brain: it does have effects on the rest of the body. The reason is that there is a blood–brain barrier which prevents large molecules from getting into the brain. Instead, the hormone is produced by special nerve cells inside the brain.

Oxytocin is also released through the use of recreational drugs like MDMA and some prescription anti-depressants.

Oxytocin was the first polypeptide hormone to be sequenced and synthesized, by Vincent du Vigneaud and colleagues in 1953.

All content from Kiddle encyclopedia articles (including the article images and facts) can be freely used under Attribution-ShareAlike license, unless stated otherwise. Cite this article:
Oxytocin Facts for Kids. Kiddle Encyclopedia.