Paallavvik (Inuktitut syllabics: ᐹᓪᓚᕝᕕᒃ) formerly Padloping Island is an uninhabited island in the Qikiqtaaluk Region of Nunavut, Canada. It is located in Davis Strait's Merchants Bay off the eastern coast of Baffin Island. The smaller Aggijjat is approximately 7 km (4.3 mi) to the east, while Auyuittuq National Park is to the west.

Padloping was originally an Inuit community on the island by the same name. In July 1941, a United States Army Air Forces (USAAF) team headed by Captain Elliott Roosevelt conducted aerial reconnaissance for an airport site in the region of Baffin Island closest to Greenland. Roosevelt selected the southern edge of Paallavvik as the most promising, there being no better places between there and Cape Dyer. His report recommended the construction of a 4,000 foot airstrip on the island. A 10-man radio/meteorological team under the command of United States Army Air Corps (USAAC) Captain J. Glenn Dyer landed at Padloping on 16 October 1941 from the transport USAT Sicilien (assisted by trawler Cormorant and sealer Quest), and commenced routine meteorological reporting after the ships left on 30 October. A local Inuk called "Vee-Vee" served as a guide for the task force and returned to Pangnirtung aboard it.

Padloping was intended to be third node of the Crimson East air ferry route and was labelled Crystal III. The station was referred to by the coded reference "Delight." It was found that it was impractical to construct a landing strip on land, and instead a 6,000 ft × 250 ft (1,829 m × 76 m) ice runway was laid out, usable from December until June. Ski-equipped aircraft inaugurated the field in February 1942, but it never saw any use for its intended purpose, and the Crimson project was cancelled in 1943. Weather reporting by the 8th Weather Squadron continued for the duration of the war. 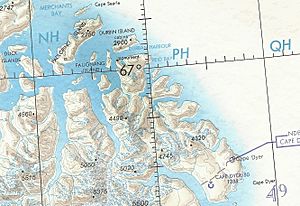 In 1953, the Royal Canadian Navy took over operations, establishing weather station VFU8. Operations were abandoned by 1956.

It is currently listed as a contaminated site, to be remediated in the future by the government.

All content from Kiddle encyclopedia articles (including the article images and facts) can be freely used under Attribution-ShareAlike license, unless stated otherwise. Cite this article:
Paallavvik Facts for Kids. Kiddle Encyclopedia.