Paddington is a 1976–1980 children's animated television series based on the Paddington Bear books by Michael Bond. The series was scripted by Bond himself, and produced by FilmFair; it was narrated by Michael Hordern, who also voiced all of the characters.

Paddington is animated in stop motion. Paddington himself is a puppet in a three-dimensional environment, whilst other characters are paper cut-outs. The final television special used a slightly different technique using 2D drawn fully animated characters.

BBC1 premiered Paddington in January 1976; the series concluded in May, but was appended by two Christmas specials in December. A second series—retitled The Adventures of Paddington—followed in October 1979, and ran until April 1980. In all, 56 episodes were broadcast, followed by three television specials: Paddington Goes to the Movies (1983), Paddington Goes to School (1984), and Paddington’s Birthday Bonanza (1987).

Episodes of Paddington are based on stories published in the following books by Michael Bond: 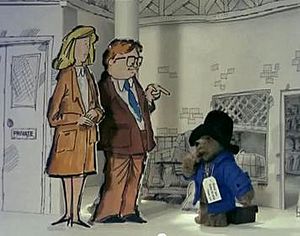 Paddington meets Mr and Mrs Brown for the first time after arriving in London Paddington station.

In 1975, FilmFair completed production of the first series, which comprised 30 episodes. The first series aired on BBC1 in 1976. The second series, which comprised 26 episodes, was titled The Adventures of Paddington. These aired in 1978 and 1979, followed by specials in 1980, 1984, and 1986. It later aired on Channel 4 with the series being shown on a wrapper programme called Take 5 which airs several other children's programmes that been previously shown on other television stations and then on ITV in 1997 as part of their children's block CITV and aired until 2000, And also, the episodes of Paddington aired on Milkshake! on Channel 5.

The composition that became known as the Paddington Bear theme was composed by Herbert Chappell and began life as incidental music for the 1972 BBC adaptation of Lord Peter Wimsey. Its first commercial release was on the b-side of the Lord Peter Wimsey theme single in 1972, where it was titled "Size Ten Shuffle" and credited to "Boyfriends". This recording - which is not the one actually featured in Paddington - has since appeared on several TV theme compilation albums.

The composition first became connected with Paddington in a theatre show, "The Adventures of a Bear Called Paddington", in 1973. The track now had lyrics (provided by Herbert Chappell's wife Brenda Johnson) and was retitled simply "Paddington Bear". A version performed by Bernard Cribbins appeared on a four-track single of songs from the show in 1974.

The piece was re-recorded (in two different versions) for the TV show; no performers are credited onscreen apart from composer Herbert Chappell. One of these takes was released on the 1976 album "Paddington's Party Record" which credits the performers as Freddie Williams and The Master Singers. This vinyl release remains the only source of the original televised version of the Paddington theme tune.

In Region 1, Mill Creek Entertainment (under licence from Cookie Jar Group) released the complete series on DVD on 15 February 2011 in a 3-disc set entitled Paddington Bear- The Complete Classic Series.

In June 1987, Screen Legends released two single video cassettes containing five episodes from the first series on each one.

In 1988, Screen Legends released a single video cassette with 10 episodes.

In 1988, Screen Legends had released a 'Watch and Play'-type video with five stories from the first series.

In 1989, GTK, Inc. released six videocassettes ? as part of their Video Classics Library.

On 4 March 1991, Abbey Home Entertainment released two videos with 10 stories on each tape.

On 21 April 2003, Universal Pictures (UK) Ltd released two videos with seven episodes on each one.

Between 2006 and 2007, three DVD releases of Paddington Bear were published by Abbey Home Media in the 'Tempo TV Classics' range of children's DVD releases.

On 8 October 2007, Abbey Home Media released two of the TV specials on a single DVD release.

On 18 April 2016, to coincide with the Queen's 90th birthday, Abbey Home Media released a special "Royal Celebration"-themed DVD release which contained the three TV specials altogether on one single disc.

All content from Kiddle encyclopedia articles (including the article images and facts) can be freely used under Attribution-ShareAlike license, unless stated otherwise. Cite this article:
Paddington (TV series) Facts for Kids. Kiddle Encyclopedia.