Panaji, also known by its former name Panjim (Portuguese: Pangim), is the capital of the Indian state of Goa and the headquarters of North Goa district. It lies on the banks of the Mandovi River estuary in the Ilhas de Goa sub-district (taluka). With a population of 114,759 in the metropolitan area, Panjim is Goa's largest urban agglomeration, ahead of Margão and Vasco da Gama.

Panjim has terraced hills, concrete buildings with balconies and red-tiled roofs, churches, and a riverside promenade. There are avenues lined with gulmohar, acacia and other trees. The Baroque Our Lady of the Immaculate Conception Church is located overlooking the main square known as Praça da Igreja. Panjim has been selected as one of hundred Indian cities to be developed as a smart city under the Smart Cities Mission.

Panjim was built with stepped streets and a seven kilometre long promenade on a planned grid system after the Portuguese relocated the capital from Velha Goa in the 17th century. It was elevated from a town to a city on March 22, 1843 making it the oldest civic institution in Asia (175 years).

Panjim was annexed by India with the rest of Goa and the former Portuguese territories after the Indian invasion of Portuguese India in 1961. It became a state-capital on Goa's elevation to statehood in 1987. Between 1961 and 1987, it was the capital of the Union Territory of Goa, Daman and Diu. A new Legislative Assembly complex was inaugurated in March 2000, across the Mandovi River, in Alto Porvorim. Panjim is also the administrative headquarters of North Goa district.

Panaji compromises of 3 major religions, with Hinduism being the majority with 64.08% followers, Christianity With 26.51% followers, and the smallest being Islam with only 8.84% followers. 0.4% of the population count as other which include Buddhist, Jain, and Sikh followers.

Panaji features a tropical monsoon climate (Köppen climate classification Am). The climate in Panaji is hot in summer and equable in winter. During summers (from March to May) the temperature reaches up to 32 °C (90 °F) and in winters (from December to February) it is usually between 31 °C (88 °F) and 23 °C (73 °F).

The monsoon period is from June to September with heavy rainfall and gusty winds. The annual average rainfall is 2,932 mm (115.43 in). 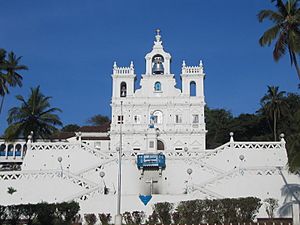 Our Lady of the Immaculate Conception Church 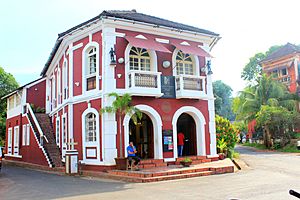 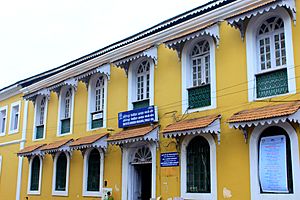 The heart of the city is the Praça da Igreja (Church Square) where the Jardim Garcia de Orta (municipal garden) with the Portuguese Baroque Igreja de Nossa Senhora da Imaculada Conceição, originally built in 1541. Other tourist attractions include the old and rebuilt Adilshahi Palace (or Idalção Palace), dating from the sixteenth century, the Institute Menezes Braganza, the Mahalaxmi Temple, the Jama Masjid Mosque, the Chapel of St. Sebastian and the Fontainhas area—which is considered to be the old Latin Quarter—as well as the nearby beach of Miramar. Hanuman Mandir at Malā on the hill top (Altinho) and its annual zatrā in February are a major attraction of Panjim. Panjim hosted the relics of Saint John Bosco (also known as Don Bosco) till 21 August 2011 at the Don Bosco Oratory.

The carnival celebrations in February include a colourful parade on the streets. This is followed by the Shigmo/xigmo, or Holi. The Narkāsūr parade on the night before Diwali in the city is very colourful.

Well-known places in Panjim are the 18th June Road (a busy thoroughfare in the heart of the town and a shopping area for tourists and locals), Mala area, Miramar beach and the Kala Academy (a cultural centre known for its structure built by architect Charles Correa). Kala Academy is a place where Goa showcases its art and culture.

Situated on the banks of Mandovi River in the heart of Panjim is ‘Old Secretariat’ building popularly known as ‘Adil Shah’s Palace’. In 1500’s the Portuguese conquerors renamed it as ‘Idalcao’s Palace’ and was the temporary residence of the first ‘Viceroy of Goa’. In 1963 this ancient structure was renovated by Goa Government to house Goa Legislative Assembly. This Structure today is 'The Goa State Museum'. 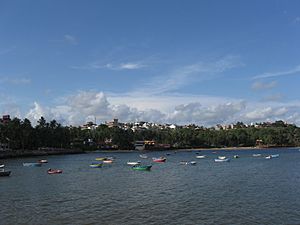 Salim Ali Bird Sanctuary is a bird sanctuary named after the ornithologist Dr Salim Ali. The sanctuary, located in the village of Chorão, near Panjim, plays host to rare and endangered bird species—both migratory and resident.

Goa is famous for its beaches, and Miramar, Bambolim, and Dona Paula are three popular beaches located near Panjim.

Dona Paula is the meeting point for two of Goa’s famous rivers, Zuari and Mandovi. These two rivers meet at the Arabian Sea. The official residence of the Governor of Goa, known as Cabo Raj Bhavan, is situated on the westernmost tip of Dona Paula.

Miramar Beach is one of the more crowded beaches in Goa, which remains full with local and international tourists throughout the year.

Also located near Panjim, is the Goa Science Centre which was opened to the public in December 2001. The Caculo Mall is also located in St. Inez near Panjim. Also Madhuban Complex, at St.inez is very popular among Panjimites.

All content from Kiddle encyclopedia articles (including the article images and facts) can be freely used under Attribution-ShareAlike license, unless stated otherwise. Cite this article:
Panaji Facts for Kids. Kiddle Encyclopedia.