The Hollywood Pantages Theatre, formerly known as RKO Pantages Theatre, is located at Hollywood and Vine (6233 Hollywood Boulevard), in Hollywood. Designed by architect B. Marcus Priteca, it was the last theater built by the vaudeville impresario Alexander Pantages. The palatial Art Deco theater opened on June 4, 1930, as part of the Pantages Theatre Circuit. 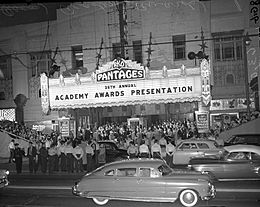 The Pantages Theatre Circuit had been built on vaudeville, and the new Hollywood theater programmed first-run movies alternating through the day with vaudeville acts for its first two years. But like other theaters during the Great Depression, it was forced to economize and thereafter operated primarily as a movie theater, though live entertainment was presented occasionally.

Alexander Pantages sold the Hollywood landmark in 1932 to Fox West Coast Theaters. In 1949, Howard Hughes acquired the Hollywood Pantages for his RKO Theatre Circuit and moved his personal offices to the building's second floor. From 1949 through 1959, the theatre hosted the American motion picture industry's annual Academy Award Ceremonies. It continued to be a major venue for roadshow movies into the 1970s. From 1965, it was operated by Pacific Theatres. The Hollywood Pantages closed as a movie theater in January, 1977, and re-opened the following month with Bubbling Brown Sugar, the first of the many stage productions that have since become its regular fare. 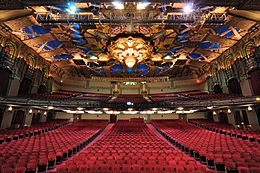 The interior of the theater

Now operated by an arm of the Nederlander Organization, the Hollywood Pantages is one of Los Angeles' leading venues for live theater (the five highest-grossing weeks in L.A.'s theatrical history were all shows at the Hollywood Pantages). The theatre has recently presented large-scale Broadway musicals such as Disney's The Lion King, which ran at the theatre for over two years, and hosted the long-running Los Angeles production of the Broadway musical Wicked.

Situated on a prime location, the area's building and a rejuvenation boom has spread to Bob Hope Square with the addition of a new W Hotel and retail stores, tied closely to the Hollywood/Vine station. The theater underwent a $10-million restoration and upgrade in 2000. The original plans for the Hollywood Pantages were for a 12-story building: 2 floors dedicated to theater and 10 floors of office space. Completion of the 10 upper floors was halted due to the 1929 stock market crash during construction. In December 2007, plans were revealed to complete the original design and additional stories, but it was never realized.

The theatre has also occasionally hosted popular music concerts, including those of the bands Dream Theater, Prince, Foo Fighters and Mark Knopfler (of Dire Straits). Talking Heads' 1984 concert film Stop Making Sense was shot there. In April 1990, Alice Cooper played Pantages in front of a sold out audience. In 1997, 4 years before her English crossover, Colombian singer-songwriter Shakira performed her first show in the United States at the Hollywood Pantages. In 2006, Mexican pop-group RBD recorded their CD/DVD Live in Hollywood at the Hollywood Pantages.

The Hollywood Pantages Theatre is also a popular location for the filming of movies, TV shows, and music videos. Concert scenes in the 1980 film The Jazz Singer and in Michael Jackson's 1995 video "You Are Not Alone" are just two examples out of many. Rickie Lee Jones's 1979 self-titled debut album includes a reference to the Pantages in her song "Chuck E.'s In Love". 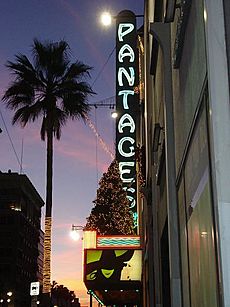 Productions at the Pantages (presented by Broadway in L.A. since 1996), have included:

All content from Kiddle encyclopedia articles (including the article images and facts) can be freely used under Attribution-ShareAlike license, unless stated otherwise. Cite this article:
Pantages Theatre (Hollywood) Facts for Kids. Kiddle Encyclopedia.