Park City Mountain Resort is a ski resort in the western United States in Park City, Utah, located 32 miles (51 km) east of Salt Lake City. Park City, as the ski resort and area is known, contains several training courses for the U.S. Ski Team, including slalom and giant slalom runs. During the 2002 Winter Olympics, it hosted the snowboarding events and the men's and women's alpine giant slalom events.

Opened 60 years ago in 1963, the resort has been a major tourist attraction for skiers from all over the United States, as well as a main employer for many of Park City's citizens. The resort was purchased by Vail Resorts in 2014 and combined the resort with neighboring Canyons Resort via an interconnect gondola to create the largest lift-served ski resort in the United States.

The resort was opened on December 21, 1963, as Treasure Mountain by United Park City Mines, the last surviving mining corporation in Park City, and the resort was opened with funds from a federal government program to revive the economically depressed town. When it originally opened, it boasted the longest gondola in the United States, as well as, a double chairlift, a J-bar lift, base and summit lodges, and a nine-hole golf course. The gondola was a four-passenger Polig-Heckel-Bleichert (PHB, a German aerial ropeway company). Its sister lift was built at Sugarloaf in Carrabassett Valley, Maine, after top members of Sugarloaf's management visited Park City's lift.

When the slopes first opened to the public, a special Skier's Subway was used to transport skiers nearly 2.5 miles (4.0 km) into the mountain through the pitch-black Spiro Tunnel on a mine train, where skiers then boarded a mining elevator ("hoist") that lifted them 1,750 feet (530 m) to the surface at the foot of the Thaynes Canyon chair, and from there they had access to the entire mountain. Aerial trams once used for hauling ore were converted into chairlifts. To this day, more than one thousand miles (1,600 km) of old silver-mine workings and tunnels remain beneath the slopes of Park City and neighboring Deer Valley.

Treasure Mountain's name was changed to the Park City Ski Area for its fourth season of 1966–67; thirty years later, it was renamed Park City Mountain Resort in 1996. The resort had grown to include eight peaks and nine bowls, with 3,300 acres (5.2 sq mi; 13.4 km2) of skiing and sixteen chairlifts. The resort has also developed summer activities including an alpine slide, alpine coaster, zip-lines, and several hiking and biking trails.

A sister ski area, originally known as Park City West and later as Canyons Resort, opened in 1968. Deer Valley Resort opened in December 1981, at the site of the former Snow Park (1946–69). 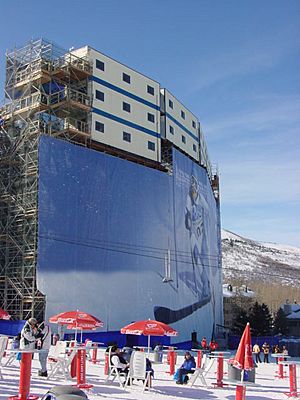 Temporary seating at the resort during the 2002 Olympics

During the 2002 games, the resort hosted the men's and women's giant slalom, men's and women's snowboarding parallel giant slalom, and both men's and women's snowboarding halfpipe events. The resort's Eagle Race Arena and Eagle Superpipe were used as the Olympics runs. Temporary stadiums were erected at the end of each run with spectator standing areas on each side, creating a combined capacity of 16,500 persons. Almost all available tickets for events at the resort were sold — 99.8 percent — to a total of 95,991 spectators. During the games, 96 percent of the resort was open for normal seasonal operations, making it the only venue to allow spectators to leave and reenter.

In March 2012, Powdr Corporation (owners of Park City Mountain Resort) announced that it had filed a lawsuit against Talisker Land Holdings, LLC (Talisker), the owner of Canyons Resort, as well as United Park City Mines Company, both partial land owners of the resort. The lawsuit filed by Powdr Corp. was in response to an eviction notice issue by Talisker, the entity that owns most of the land the ski runs are on, who had been leasing it to Powdr Corp. (a continuation of the lease made between Park City Mines and Powdr Corp. when Talisker bought the land from Park City Mines). Powdr Corp. claimed that they had initiated talks with Talisker to extend their lease to 2051, and that Talisker had refused to agree to the terms and threatened to close the resort. In response, Talisker claimed that Powdr Corp. had failed to agree to the new terms set down by Talisker, and that they have never threatened to close the resort. Powdr Corp. sued Talisker for $7,000,000 for compensatory and punitive damages for the threat of the closure of the resort.

Park City Mountain Resort had leased the land on which its ski runs are located for $155,000 per year, with an option to renew the lease for 20 years. In 2011, when this option came due, Powdr Corp. failed to renew the lease in a timely manner and sent a letter two days after the lease had expired. Eight months later, Powdr Corp. received a letter from Talisker that their lease had expired and they were to turn over the land and its improvements to Talisker. In 2013, Talisker leased Canyons Resort to Vail Resorts who then took over the legal action. Near the end of May 2013, an eviction notice was served on PCMR to vacate the leased land of the ski area. ().

On September 11, 2014, Vail Resorts announced that it had purchased Park City Mountain Resort for $182.5 million, and that it would combine the resort with neighboring Canyons Resort over the summer of 2015 for the 2015-16 season.

When the purchase was finalized, Vail added Park City Mountain Resort to its EPIC season pass program for the 2014-15 season. In 2015, the merger of PCMR with Canyons was undertaken by Doppelmayr USA as part of a project that built two new lifts and relocated a third. A new gondola called Quicksilver was built between the bottom of Silverlode at PCMR and a point below the top of Iron Mountain at Canyons. King Con was upgraded to a high speed six pack, while the original King Con high speed quad was relocated to replace the Motherlode triple chairlift. The upgrades on the PCMR side were done to alleviate expected congestion at Silverlode and King Con from the added interconnect gondola. The former Canyons Resort base area was renamed the Canyons Village at Park City and the entire combined resort now operates under the Park City Mountain Resort name.

Park City mountain resort is home to many ski schools run by the mountain, but is also home to privately owned ski schools. In 2017, the various individual clubs came together to form one organization - Park City Ski & Snowboard Club.

For the 2018 season, Doppelmayr constructed a high speed quad to replace the High Meadow lift at Red Pine Lodge.

For the 2019 season, a fixed grip quad called "Over and Out" was constructed running from the bottom of Tombstone to a point just above the top of Sunrise, providing quick egress from the Tombstone and Iron Mountain pods to the Canyons Village base area by alleviating the need to take Tombstone back to Red Pine Lodge.

During the summer, Payday provides lift service to an alpine slide and an alpine coaster. Restaurants are also open during the summer, and will often have live bands and other activities. The resort creates and maintains its own trails and trail connections to the rest of the Park City area trail system. Activities at the resort include miniature golf, a climbing wall, and trampolines with a harness. 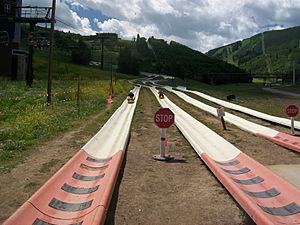 Alpine Slide at Mountain side Resort in Park City, Utah

The resort offers lift-served access for hiking and mountain biking on Crescent, Payday, and Town lifts from the Park City Mountain Village base. Canyons Village provides hiking and biking access via the Red Pine Gondola and Short Cut. Most trails in the area are family-friendly and not very strenuous. The majority of mountain bike trails are intermediate, with a small percentage designated as expert trails.

All content from Kiddle encyclopedia articles (including the article images and facts) can be freely used under Attribution-ShareAlike license, unless stated otherwise. Cite this article:
Park City Mountain Resort Facts for Kids. Kiddle Encyclopedia.