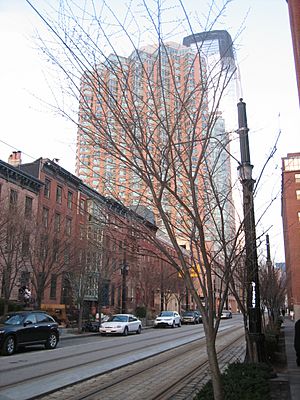 Paulus Hook is a community on the Hudson River waterfront in Jersey City, New Jersey, located one mile across the river from Manhattan. The name Hook comes from the Dutch word "hoeck" which translates into "point of land." This "point of land" has been described as an elevated area, the location of which is today bounded by Montgomery, Hudson, Dudley and Van Vorst Streets. The neighborhood's main street is the north- and south-running Washington Street. The waterfront of Paulus Hook is along the basin of the Morris Canal in a park with a segment of Liberty State Park. The Hudson-Bergen Light Rail has a Paulus Hook stop at Essex Street and the Liberty Water Taxi at Warren Street. The introduction of the light rail and development of office buildings on the Hudson Waterfront have brought more businesses to Morris Street including a number of restaurants with outdoor seating and small neighborhood shops.

Originally the location was called Arressick or Arisheck Island by the earliest settlers after a corrupted Lenape term, possibly from Kaniskeck meaning a long, grassy marsh or meadow.

The location was originally part of a tract of land purchased by Michael Pauw, an Amsterdam Burgomaster and Lord of Achttienhoven in 1630 as part the Pavonia, the first settlement at Paulus Hook was in 1633. The area was an island at high tide, in 1638 was granted to Pauw's agent, a man named Micheal Paulez (Pauluson, Powles) who operated an occasional ferry and traded with the local Lenape population. His name was eventually anglicized to Paulus, and given to the hook jutting into the river and bay.

On February 25, 1643, 100 Native American Indians were massacred at or in the vicinity of Paulus Hook (Pavonia Massacre).

Until the American Revolution, the Dutch and then the English governed the site. In 1664, an expedition sailed from England to seize Dutch colonies in the New World. New Amsterdam Governor Peter Stuyvesant and the Dutch surrendered to the English forces on September 8, 1664 but the Dutch recaptured the territory the next year. Eventually, as a result of a war in the "Old World," the Dutch lost their "New World" territories to the British. In 1672, war broke out between England and the Netherlands. Peace was achieved in 1674 and under terms of the Treaty of Westminster, England recovered New Netherland. The king awarded the territories to the Duke of York (later King James II) the region between New England and Maryland as a proprietary colony (as opposed to a royal colony). James then granted the land between the Hudson River and the Delaware River (the land that would become New Jersey) to two friends who had been loyal through the English Civil War: Sir George Carteret and Lord Berkeley of Stratton. The Duke, to honor Carteret who had been with him in exile in Jersey, Channel Islands, named part of the territory "New Jersey."

In 1776, patriot colonists built several forts to defend the western banks of the Hudson, one of which was located at Paulus Hook. After suffering defeats in New York City, the rebels abandoned Paulus Hook and the British occupied it. The fort was a naturally defensible position that guarded the gateway to New Jersey.

In mid-summer 1779, a flamboyant 23-year-old Princeton University graduate, Major Henry Lee, recommended to General George Washington a daring plan to attack the fort, in what became known as the Battle of Paulus Hook. The assault was planned to begin shortly after midnight on August 19, 1779. Lee led a force of about 300 men, some of whom got lost during the march, through the swampy, marshy land. The attack was late in getting started but the main contingent of the force was able to reach the fort's gate without being challenged. It is believed that the British mistook the approaching force for Hessian allies returning from patrol but this is not documented. The attacking Patriots succeeded in damaging the fort and took 158 prisoners, but were unable to destroy the fort and spike its cannons. As daytime arrived, Lee decided that prudent action demanded that the Patriots withdraw before the British forces from New York could cross the river. Paulus Hook remained in British hands until after the war but the battle was a small strategic victory for the forces of independence as it forced the British to abandon their plans for taking rebel positions in the New York area.

On November 22, 1783, the British evacuated Paulus Hook and sailed home. This was three days before they left New York on Evacuation Day, November 25, 1783. 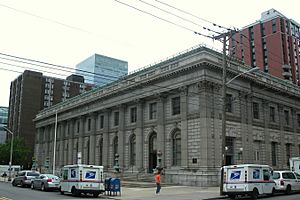 Paulus Hook is currently one of the most desirable neighborhoods in Jersey City. Real estate prices are generally higher than in surrounding neighborhoods, which include Liberty Harbor, the Financial District, WALDO, and Hamilton Park. Morris Street and Washington Street have become the "restaurant rows" of the neighborhood, which is mainly residential.

On October 29, 2012, Paulus Hook was devastated during Hurricane Sandy, with significant flooding occurring throughout the neighborhood.

All content from Kiddle encyclopedia articles (including the article images and facts) can be freely used under Attribution-ShareAlike license, unless stated otherwise. Cite this article:
Paulus Hook, Jersey City Facts for Kids. Kiddle Encyclopedia.