The Peconic River is a river within Suffolk County on Long Island, New York in the United States. The river is located in the eastern end of Long Island. The Peconic River drains an area between the Harbor Hill and Ronkonkoma terminal moraines, and flows into Flanders Bay which in turn connects to Peconic Bay east of Riverhead. 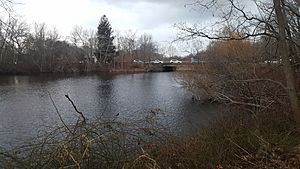 The Peconic River near its mouth in Riverhead, New York

The river originates in bogs and wetlands in central Long Island near the Brookhaven National Laboratory and flows eastward to the Peconic Bay. It is the longest river on Long Island and is almost entirely within the Central Long Island Pine Barrens which was set up in 1993 to protect its relative wilderness standing.

It is fresh water until about the center of Riverhead where it becomes an estuary.

The river is slow-moving, making it ideal for canoeing and kayaking.

All content from Kiddle encyclopedia articles (including the article images and facts) can be freely used under Attribution-ShareAlike license, unless stated otherwise. Cite this article:
Peconic River Facts for Kids. Kiddle Encyclopedia.