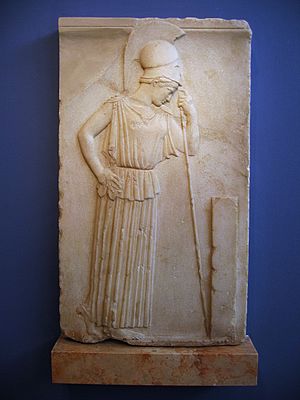 Peplum movie (sometimes, sword and sandal movie) is a movie genre. Peplum movies have an ancient Greek, Roman, or Biblical setting. "Peplum" refers to a garment worn by the ancient Greeks and Romans.

The central character in a peplum movie is usually a muscular hero like Hercules or Samson. He wears a short peplum and battles monsters, despots, and evil queens. This oil-slicked hero is rewarded at the end of the movie with the cheers of his people, clan, or tribe — and the hand of a lovely princess.

Peplum movies were mostly made in Italy. Italian moviemakers modelled peplum movies on the big budget Hollywood epics like Spartacus. The genre was very important in Italian moviemaking from 1957 to 1965, but was shoved aside in 1965 by the "Spaghetti Western".

All content from Kiddle encyclopedia articles (including the article images and facts) can be freely used under Attribution-ShareAlike license, unless stated otherwise. Cite this article:
Peplum movie Facts for Kids. Kiddle Encyclopedia.