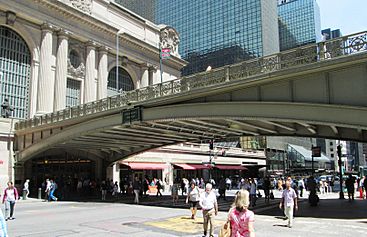 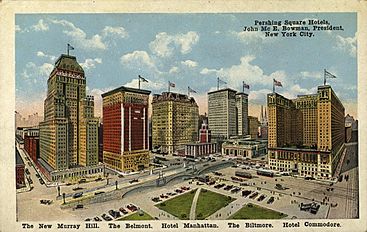 Pershing Square was named after John J. Pershing in 1919. The name was originally supposed to apply to the block bounded by Park Avenue, Lexington Avenue, 41st Street, and 42nd Street. Three buildings were ultimately developed on the block in the 1920s: the Pershing Square Building, 110 East 42nd Street, and the Chanin Building. Subsequently, the name applied to the service roads of the Park Avenue Viaduct. A tourist information center under the viaduct, at Pershing Square, was built in 1939; it was later reconfigured to be a store and then a restaurant. The service roads between 42nd and 41st Streets were converted into a pedestrian public plaza in 2018.

The square is named after General John J. Pershing, and was originally intended to be an open plaza in Pershing's honor occupying the entire block between 41st Street, Park Avenue, 42nd Street, and Lexington Avenue. Until 1885, Steuben Street—named for Revolutionary War general Baron von Steuben—ran diagonally across the block. The Grand Union Hotel was built on the northwestern corner of the block in 1883. The eastern part of the block contained the Manhattan Storage Warehouse, which was built in 1882. The hotel was condemned via eminent domain in 1914, and it was subsequently demolished to make way for the construction of the New York City Subway's Grand Central–42nd Street station, which ran diagonally below the site.

Shortly after the opening of the Park Avenue Viaduct in 1919, the area at the bottom of the viaduct was renamed for Pershing. The former Grand Union Hotel space was proposed for use as an open plaza with a three-story memorial called "Victory Hall". The idea of a victory hall was opposed by Fiorello H. La Guardia, president of the New York City Board of Aldermen. The Transit Commission attempted to sell the building site in May 1920 for $2.8 million (equal to $26.0 million in 2016), but no one placed a bid.

In July 1920, a realty consortium headed by investor Henry Mandel bought the Grand Union site. Mandel gave the Bowery Savings Bank the center part of the Pershing Square block, which would be developed into an office building at 110 East 42nd Street, completed in 1923. The western part of the site became the Pershing Square Building, also completed in 1923. The eastern part, which contained the storage warehouse, was redeveloped into the Chanin Building, which opened in 1929. The "Pershing Square" name subsequently applied to the service roads of the Park Avenue Viaduct between 40th and 42nd streets.

Viaduct space and closure to traffic

The space under the viaduct between 41st and 42nd streets was originally used as a trolley barn. In 1938, the city announced that it would build a tourist information center within that space in advance of the 1939 New York World's Fair. The city subsequently built a steel and glass-brick structure under the center arch of the viaduct. The structure, located at 90 East 42nd Street, opened in December 1939 and was initially used to provide tourist information. During World War II, the space was used by United Service Organizations, and after the war, became an outpost of the New York Convention and Visitors Bureau. The building had become an unemployment office by the 1980s.

In 1989, the Grand Central Partnership proposed to turn the space under the viaduct, at the time a discount store, into a restaurant. Pershing Square would also be closed to traffic between 41st and 42nd streets. At the time, the space was occupied by discount retailer North Pole Stores, which relocated elsewhere in March 1992. The Grand Central Partnership decided to go forward with the restaurant-conversion project in 1993. However, the project had experienced difficulties because Manhattan Community Board 5 was opposed to the partnership's plan to close the adjacent block of Park Avenue, and the city had requested that the project undergo a lengthy zoning procedure called the Uniform Land Use Review Procedure. The community board opposed the closure because, between Seventh Avenue and Second Avenue, the only opportunity for eastbound traffic on 42nd Street to make a right turn was at Park Avenue.

In 1995, the city and the Grand Central Partnership unveiled plans to restore the space at a cost of $2 million, then lease it as a restaurant. The Pershing Square Cafe signed a lease at the space in 1997. The owner of the renovated space, Michael O'Keeffe, placed so much attention to the renovation of the space that the project's costs increased to $5 million, and the cafe's opening date was pushed back by several months. The details in the cafe included slot-headed screws, the only ones available when the viaduct was built; chairs and electric cords imported from Paris, and a hand-rubbed paint scheme. The entrance of the cafe was placed at 42nd Street, while the kitchen was located near the 41st Street section of the viaduct. The service roads between 41st and 42nd streets remained open to traffic until 2018 when they were converted into a pedestrian public plaza.

All content from Kiddle encyclopedia articles (including the article images and facts) can be freely used under Attribution-ShareAlike license, unless stated otherwise. Cite this article:
Pershing Square, Manhattan Facts for Kids. Kiddle Encyclopedia.