The Chanin Building, also known as 122 East 42nd Street, is a 56-story office skyscraper in Midtown Manhattan in New York City. It is located on the southwest corner of 42nd Street and Lexington Avenue, near Grand Central Terminal to the north and adjacent to 110 East 42nd Street to the west. The building is named for Irwin S. Chanin, its developer.

The structure was designed by Sloan & Robertson in the Art Deco style, with the assistance of Chanin's architect Jacques Delamarre. It incorporates architectural sculpture by Rene Paul Chambellan, as well as a facade of brick and terracotta. The skyscraper reaches 680 feet (210 m), with a 649-foot-tall (198 m) roof topped by a 31-foot (9.4 m) spire. The Chanin Building includes numerous setbacks to conform with the 1916 Zoning Resolution.

The Chanin Building was constructed in 1927–1929 on the site of a warehouse, one of the last remaining undeveloped sites around Grand Central Terminal. Upon opening, the building was almost fully rented, and it was the third-tallest building in New York City. Over the years, the upper floors have contained a movie theater, observation deck, and radio broadcast station, while the lower floors were used as offices and a bus terminal. The building was designated a New York City landmark in 1978, and was added to the National Register of Historic Places in 1980.

The Chanin Building employs a series of setbacks that end in a "vigorous, toothed" pinnacle. Because of the varying widths of the surrounding streets, three separate groups of setbacks were mandated for each side per the 1916 Zoning Resolution, with the result that the Chanin Building was "design[ed] in masses rather than in facades". The lowest four stories occupy the entire building lot, while there is a recession in the middle of the eastern facade from the fifth through 17th stories. The subsequent stories form a jagged "pyramid", with setbacks above the 17th, 30th, and 52nd stories. 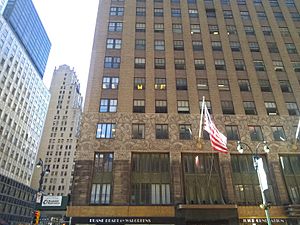 Lower section of the facade, as seen from across 42nd Street; the Socony–Mobil Building is visible at left

The Chanin Building is clad with buff brick, limestone, and terracotta, as well as bronze, marble, and custom-designed colored glass ornament. The base of the building bears black Belgian marble around the storefront windows, which are each made of plate glass. Directly above, a bronze frieze depicts scenes of evolution, ranging from simple organisms to more complex animals and plants. A second terracotta frieze runs the whole length of the lower facade, presenting a dramatic collection of angular zigzags and curvy leaves. A bas-relief by Edward Trumbull, designed in the Art Deco style, wraps around the facade.

The facade continues upward in relatively simple tones. The second and third floors include bronze-framed groups of triple-paned windows, with bronze Art Deco spandrel panels between the floors. Each grouping is separated by vertical piers made of limestone, topped by elaborate capitals. The fourth story is faced with ornate terracotta panels depicting plants, evoking the stylized forms common in the Art Deco style. There are buttresses on the fifth and sixth stories of the Lexington Avenue facade's recessed section, and at the corners of the 30th through 49th stories. The crown, above the Chanin Company's 52nd floor offices, contains abstract-patterned projecting ornamentation, with buttresses outside the 53rd floor.

Originally, 212 artificial candles at the top of the Chanin Building provided the equivalent of 30 million candlepower. These lights, meant to highlight the details of the building, were characteristic of the Art Deco style, and on cloudless nights, could be seen from more than 40 miles (64 km) away. They had been toned down by the late twentieth century.

The interior design was mostly the work of Rene Paul Chambellan and Jacques Delamarre. The former specialized in architectural sculpture in numerous styles, such as the Art Deco style, while the latter worked for the Chanin Company.

The lobby is accessed by passageways from 42nd and 41st Streets, with a side entrance from Lexington Avenue. The lobby is decorated in a "modernistic" style themed around "The City of Opportunity". Eight bronze reliefs designed by Chambellan perch above ornate bronze radiator grilles. The grilles depict four categories of physical and mental life. The bronze ornamentation continues in the waves on the floor, mailboxes, and elevator doors extending the general Art Deco style from the outside inward. The lobby also contains other ornamentation such as terrazzo floors with bronze inlays, as well as tan marble walls.

Marble stairs lead to the basement where there are connections to Grand Central Terminal and the New York City Subway's Grand Central–42nd Street station. Also inside are 21 high speed passenger elevators, split up into three elevator banks, as well as one service elevator. When the building was opened, the first floor, mezzanine, and second floor were used by banks and other commercial concerns.

The lobby originally served as a "palatial" bus terminal operated by the Baltimore and Ohio Railroad. The terminal was outfitted with marble surfaces and also contained waiting rooms and ticket offices. Buses would pull onto a revolving turntable within the terminal, which received boarding passengers on one side and deposited alighting passengers on the other. The coach terminal closed after the railroad discontinued all passenger service north of Baltimore in 1958. 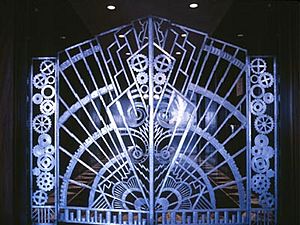 Designed by Rene Paul Chambellan, these gates led to the private offices of Irwin S. Chanin

The third through 48th floors consist almost entirely of leasable office space, while the 49th and 50th floors contain the Chanin brothers' board room and offices. When originally completed, the 50th floor also had a small movie theater, which was later converted into the Chanin Organization's offices. The floors above were originally the offices of the Chanin Organization, with an Art Deco restroom that a building trade convention's judges referred to as "America's finest bathroom". Irwin Chanin's 52nd floor offices were accessed through a set of bronze gates designed by Chambellan, while bronze vector grilles were situated within the office.

As a dominant landmark in the midtown skyline upon its opening, the building had an open-air observation deck on the 54th floor. It was one of three open-air observatories in the city following World War II, the others being at 30 Rockefeller Plaza and at the Empire State Building, though there had been several other observation decks in the city prior to the war. The Chanin Building only charged 25 cents for admission, since it was not as well known as the other two buildings with outdoor observatories. In later years, other nearby buildings surpassed the Chanin Building in height (including the Chrysler Building, diagonally across Lexington Avenue and 42nd Street), and so the observation deck was closed in the mid-20th century. 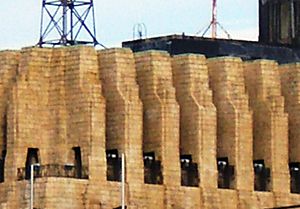 Close-up of the embrasures at the Chanin Building's crenellated top

The top of the building was used as a transmission site for WQXR-FM starting on December 15, 1941, when it was relocated from Long Island City in Queens. In 1965, the transmitter was moved to the Empire State Building.

The completion of the underground Grand Central Terminal in 1913 resulted in the rapid development of the areas around Grand Central, and a corresponding increase in real-estate prices. Among these were the New York Central Building at 47th Street and Park Avenue, as well as the Grand Central Palace across 42nd Street from the present Chanin Building. By 1920, the area had become what The New York Times called "a great civic centre". One site that had yet to be redeveloped was the Manhattan Storage Warehouse, which was built in 1882 and still occupied the site of the Chanin Building.

Irwin Chanin was an American architect and real estate developer who designed several Art Deco towers and Broadway theaters. He and his brother Henry I. Chanin designed their first Manhattan buildings in 1924 and later built and operated a number of theaters and other structures related to the entertainment industry, including the Roxy Theatre and the Hotel Lincoln.

The first plan for a skyscraper at the Chanin Building site was made in 1925, when a developer proposed a 35-story skyscraper. The Chanins took over an existing 105-year leasehold for the land underneath the Manhattan Storage Warehouse in August 1926. The Chanin brothers initially envisioned a bulky square 45-story tower designed by Rouse & Goldstone.

The brothers still had a reputation for being involved mostly in the theater industry. According to one author, when the Chanins started clearing the site in 1927, many members of the general public could not tell "whether the Chanins were builders or [...] theater-owners who had taken up building as a sideline." The warehouse itself was difficult to clear, since its 5-foot-thick (1.5 m) walls had been designed to protect against "burglary, fire and assault". The process entailed clearing away 7,500 truck loads of brick, 1,000 of scrap metal, and 3,500 of loose earth. The official plans for the Chanin Building were filed with the New York City Department of Buildings in June 1927, at which point 60% of the warehouse had been demolished. Sloan & Robertson, architects of the nearby Graybar Building, Pershing Square Building, and 110 East 42nd Street, were hired to design the Chanin Building.

Once the foundation had been laid, the first steel columns were installed in January 1928, with Irwin S. Chanin driving in the first rivet. The steel frame weighed an estimated 15,000 short tons (13,000 long tons) and was held together by 1.5 million rivets and 160,000 bolts. Crowds frequently stopped to observe the construction process. The erection of the frame was not without problems: in one incident, the boom of a construction derrick fell from the 20th floor, nearly splitting a truck in half, though no one was injured or killed. The steelwork was completed by that June, and as was tradition at the time, two gold rivets for the Chanin Building were driven into the frame on July 2 to mark this event. The building held its topping out ceremony in August 1928. 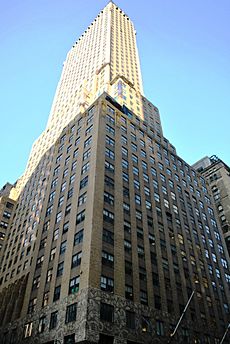 Viewed from beside the Chrysler Building, on the opposite corner of Lexington Avenue and 42nd Street

The structure was declared complete on January 23, 1929, exactly one year after the first rivet had been driven into the building. It opened January 29 at an estimated cost of $12-14 million, with an informal opening attended by mayor Jimmy Walker. The Chanin Building thus became the first major skyscraper in Terminal City, and the third-tallest building in New York City behind the Woolworth Building and the Metropolitan Life Insurance Company Tower. The Chanin Building had more floors than the Woolworth, despite being 112 feet (34 m) shorter. Though the Chanin Building was later surpassed in height by other buildings, including the adjacent 1,046-foot (319 m) Chrysler Building that opened a year later, Irwin Chanin was instead focused on attracting tenants with an "efficient, up-to-date" facility.

Upon opening, the Chanin Building was almost fully rented. The builders projected that by September 1, 1929, the building would be 70% rented, though the actual occupancy rate at that date was 92%. Furthermore, in 1930, The New York Times reported that 95% of the structure's 710,000 square feet (66,000 m2) was occupied by 9,000 workers. Initially, the lobby space was occupied by the Baltimore and Ohio Railroad's bus terminal, ticket offices, and waiting rooms. The office space included such tenants as the Kimberly-Clark paper company, Pan American Petroleum and Transport Company, and Fairchild Aircraft, while the Chanin company took all the space above the 50th floor. In addition, the Sterling National Bank took up much of the mezzanine space on the Lexington Avenue side, and a self-service and table-service restaurant opened in the basement. Through the Great Depression, leasing proceeded actively.

The Chanin Building was designated a city landmark by the New York City Landmarks Preservation Commission in 1978, and was added to the National Register of Historic Places in 1980. By the 1990s, the building was owned by a syndicate headed by Stanley Stahl. Modern tenants include the Apple Bank for Savings, of which Stahl was the only stockholder, as well as the International Rescue Committee, which had moved to the building in 1994.

All content from Kiddle encyclopedia articles (including the article images and facts) can be freely used under Attribution-ShareAlike license, unless stated otherwise. Cite this article:
Chanin Building Facts for Kids. Kiddle Encyclopedia.