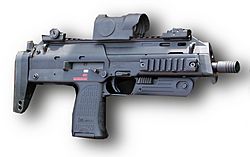 A Heckler & Koch MP7, one kind of PDW

A personal defense weapon (PDW) is usually defined as a light, compact and easy to use firearm. However the definition varies depending on context and who you ask. Many will still say it is a Short-barreled rifle (SBR). These are regulated in the United States by the ATF. Many SBRs are available as selective fire (can switch between semi-automatic or fully automatic fire). The United States Department of Homeland Security defines a personal defense weapon as an M4 carbine (or a Colt AR-15 civilian semi-automatic rifle). Some governments' definition of PDWs includes handguns. An example is the Czech Republic which has proposed a constitutional amendment that would allow its citizens to own and keep PDWs as a way to discourage terrorists. Regardless, a PDW is usually agreed upon as being somewhere between a submachine gun and an assault rifle.

In the 1980s, the term was used for troops in tight, confined environments. They needed a compact automatic weapon that could defeat body armor. It was designed for troops in tanks, military trucks and those operating from aircraft including pilots. The majority of soldiers do not take part in an infantry battle. Their jobs are usually to support the infantry. Their main role is not winning a fight, but often to escape an ambush. In other situations they may assist the infantry. PDWs are also used by bodyguards as they can be hidden under a jacket but still allowed good firepower. PDWs tend to be shorter range weapons.

The term evolved as concealed carry became more popular, especially in places like the United States. Certain states in the United States make carrying a firearm for personal defense relatively easy while others make it more difficult. Also, quite a few other countries allow concealed carry, to various degrees. Pistols, especially compact models, are very popular self defense weapons today. Also, there are now a number of pistols available in rifle calibers.

In places where a firearm cannot be carried or the person chooses not to carry a firearm, there are other weapons they can carry. Common items such as a credit card, car keys, a pen or even a scarf can be effective self defense weapons. Because of the popularity of self defense, there are also specially designed non-lethal weapons designed not to look like weapons.

All content from Kiddle encyclopedia articles (including the article images and facts) can be freely used under Attribution-ShareAlike license, unless stated otherwise. Cite this article:
Personal defense weapon Facts for Kids. Kiddle Encyclopedia.