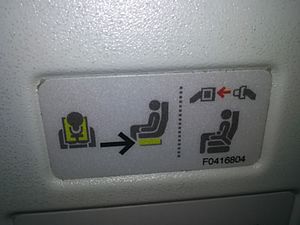 On many aircraft life vests are underneath the seats, as indicated by this sign

A life vest (also called Personal flotation device, lifejacket, or cork jacket) is a special type of clothing. The vest makes people float in water. It also keeps their head out of the water so that they can breathe. There are different categories of life vests. They are mainly different in how much flotation they provide. Some life vests inflate all by themselves, others need to be filled with air manually. 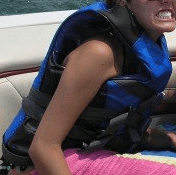 A buoyancy aid (with a foam core)

The simplest and least buoyant type of PFD comes in the form of nylon-lined foam vests, used predominantly in water sports such as kayaking, canoeing and dinghy sailing.

Buoyancy aids are designed to allow freedom of movement while providing a user with the necessary buoyancy. They are also designed for minimal maintenance and as they are only constructed from foam and can be mass-produced inexpensively, making them one of the most common forms of PFDs.

Some buoyancy aids also come designed especially for children and youth. These vests may include one or two understraps to be worn between the legs of the wearer and also a headrest flap. The understraps are designed to keep the vest from riding up when worn in the water and restrict the wearer from slipping out of the life vest. These straps are adjustable and are included on many different life vests designed to be worn by everyone from infants to adults. The headrest flap is designed to help support the head and keep it out of the water. A grab handle is attached to the headrest to be used if needed to rescue or lift someone out of the water.

Buoyancy aids are rated by the amount of buoyancy they provide in Newtons - the minimum rating to be considered suitable as an adult life-jacket for offshore use is 150 newtons (34 lbf). 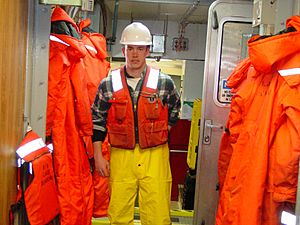 A man wearing a life vest, with another life vest hanging on a hook at lower left 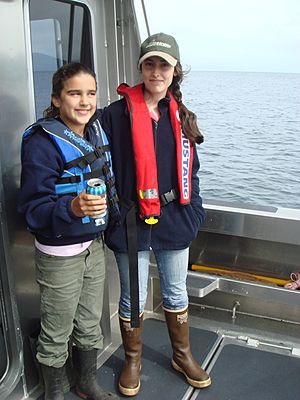 Life jackets for outfitting large commercial transport ventures in potentially dangerous waters, such as coastal cruises, offshore passages, and overwater air flights, consisting of either a single air chamber or a pair of (twin or double) sealed air chambers constructed of coated nylon (sometimes with a protective outer encasing of heavier, tougher material such as vinyl), joined together. For use aboard ships they may be constructed of foam. Twin air chambers provide for redundancy in the event of one of the air chambers leaking or failing to "fire", for example if the thin air cell fabric is sliced open by sharp metal fragments during emergency evacuation and egress. Most life jackets for leisure use are of the single air chamber type.

Aircraft devices for crew and passengers are always inflatable since it may be necessary to swim down and away from a ditched or submerged aircraft and inflated or foam filled devices would significantly impede a person from swimming downward in order to escape a vehicle cabin. Upon surfacing, the person then inflates the device, orally or by triggering the gas canister release mechanism. Most commercial passenger life jackets are fitted with a plastic whistle for attracting attention. It has a light which is activated when in contact with water.

Quality life jackets always provide more buoyancy than offered by the buoyancy aids alone. The positioning of the buoyancy on the wearer's torso is such that a righting moment (rotational force) results that will eventually turn most persons who are floating face down in the water (for example, because they are unconscious) into a face up orientation with their bodies inclined backward, unlike more simply designed common foam buoyancy vests.

Today these air chamber vests are commonly referred to as 'inflatable life jackets or vests' and are available not only for commercial applications but also for those engaged in recreational boating, fishing, sailing, kayaking and canoeing. They are available in a variety of styles and are generally more comfortable and less bulky than traditional foam vests.

The air chambers are always located over the breast, across the shoulders and encircle the back of the head. They may be inflated by either self-contained carbon dioxide cartridges activated by pulling a cord, or blow tubes with a one-way valve for inflation by exhalation. Some inflatable life jackets also react with salt or fresh water, which causes them to self-inflate. The latest generation of self-triggering inflation devices responds to water pressure when submerged and incorporates an actuator known as a 'hydrostatic release'. All automatic life-jackets can be fired manually if required. Regardless of whether manually or automatically triggered, a pin punctures the cartridge/canister and the CO2 gas escapes into the sealed air chamber.

However, there is a chance that these water pressure activated inflation devices do not inflate the life jacket if a person is wearing waterproof clothing and falls into the water face-down. In these cases the buoyancy of the clothing holds a person on the water surface, which prevents the hydrostatic release. As a result, a person can drown although wearing a fully functional life jacket. In addition there are some circumstances in which the use of self-triggering devices can result in the wearer becoming trapped underwater. For example, the coxswain of a bowloader rowing shell risks being unable to escape should the craft capsize.

To be on the safe side, a pill-activated inflation device is preferred. A small pill that dissolves on water contact is the safest option, as it also works in shallow waters where a hydrostatic activator fails. This type of jacket is called an 'automatic'. As it is more sensitive to the presence of water, early models could also be activated by very heavy rain or spray. For this reason, spare re-arming kits should be carried on board for each life jacket. However, with modern cup/bobbin mechanisms this problem rarely arises and mechanisms such as the Halkey Roberts Pro firing system have all but eliminated accidental firing.

Accessories such as leg straps can be utilized to keep the inflated chambers in position for floating in a stable attitude, and splash or face shields constructed of clear see-through vinyl covers the head and face to prevent water from waves from inundating the face and entering the airway through the nose or mouth. 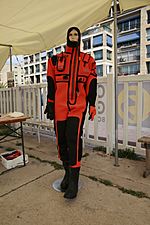 An example of a survival suit on a dummy

Some formats of PFDs are designed for long term immersion in cold water in that they provide insulation as well as buoyancy. While a wetsuit of neoprene rubber or a diver's drysuit provides a degree of flotation, in most maritime countries they are not formally considered by regulatory agencies as approved lifesaving devices or as PFDs.

It is possible for an incapacitated person in the water to float face-down while wearing only a wet suit or a dry suit since they are not designed to serve as lifesaving devices in the normal understanding of that term.

The Mark 10 Submarine Escape Immersion Equipment (SEIE) suit is intended to allow submariners to escape from much deeper depths than currently possible with the Steinke hood. Some United States Navy submarines already have the system, with an ambitious installation and training schedule in place for the remainder of the fleet.

Because it is a full-body suit, the Mark 10 provides thermal protection once the wearer reaches the surface, and the Royal Navy has successfully tested it at 180 metres (600 ft) depths.

Scuba divers commonly wear a buoyancy compensator, which has an inflatable gas chamber. The amount of gas can be increased or decreased to enable the diver to ascend, descend or maintain neutral buoyancy at a given water depth and to provide positive buoyancy in an emergency to bring him to the surface or keep him at the surface.

Specialized life jackets include shorter-profile vests commonly used for kayaking (especially playboating), and high-buoyant types for river outfitters and other whitewater professionals. PFDs which include harnesses for tethered rescue work ('live-bait rescue') and pockets or daisy-chains (a series of loops created by sewing flat nylon webbing at regular intervals for the attachment of rescue gear) are made for swiftwater rescue technicians. 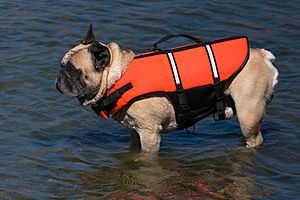 Personal flotation devices have been developed for dogs and other pets.

While the USCG does not certify personal flotation devices for animals, many manufacturers produce life jackets for dogs and cats. Dogs and cats have been known to die from drowning, either because they do not know how to swim, or because they tire out from overexposure or old age, or have a medical complication such as a seizure, or become unconscious.

Most life jackets on the market are designed with foam that wraps around the animal's torso and neck. They provide a basic amount of buoyancy for a dog, but may not provide enough support for the head. They are not ideal for use with heavy dogs. However, they often incorporate a grab handle, which may help to hoist the dog back into the boat.

Although most pet life jackets are passive devices, there is at least one automatically inflated life jacket available for pets (made by Critter’s Inflatable, LLC). An automatic flotation device is generally more expensive than a foam life jacket, but, like automatic PFDs designed for humans, they are less bulky to wear when not inflated, and when inflated may provide more buoyancy than foam devices. Automatic pet flotation devices are popular in the bulldog community, and also for water therapy where extra support may be needed under the head.

All content from Kiddle encyclopedia articles (including the article images and facts) can be freely used under Attribution-ShareAlike license, unless stated otherwise. Cite this article:
Life vest Facts for Kids. Kiddle Encyclopedia.