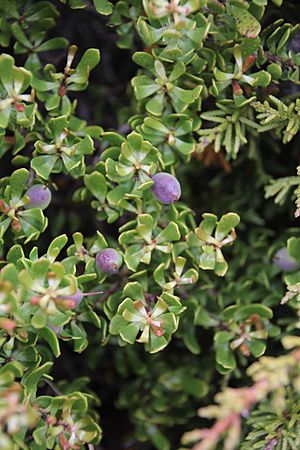 Persoonia gunnii is a species of flowering plant in the family Proteaceae and is endemic to Tasmania. It is an erect shrub with young branchlets that are hairy at first, spatula-shaped to egg-shaped leaves with the narrower end towards the base, and white to cream-coloured flowers.

Persoonia gunnii was first formally described in 1847 by the English botanist Joseph Dalton Hooker in W.D. Hooker's London Journal of Botany from specimens collected on the "May-day Plains" by R.C. Gunn.

Populations with characteristics intermediate between P. gunnii and P. muelleri are known from Dove Lake–Cradle Mountain and Adamsons Peak–South Cape localities. Further intermediates with P. muelleri subspecies angustifolia have been recorded from Adamsons Peak, the South Cape Range and the Recherche Bay area in southern Tasmania, but further work is needed to assess their status.

This geebung is endemic to Tasmania where it is found to the south and west of Black Bluff Range–Lake St Clair and the Derwent River at altitudes from 500 to 1,300 m (1,600 to 4,300 ft) above sea level. Habitats include alpine heathland, subalpine wet sclerophyll forest and rainforest, on soils composed of and lying over dolerite, quartzite and limestone.

All content from Kiddle encyclopedia articles (including the article images and facts) can be freely used under Attribution-ShareAlike license, unless stated otherwise. Cite this article:
Persoonia gunnii Facts for Kids. Kiddle Encyclopedia.