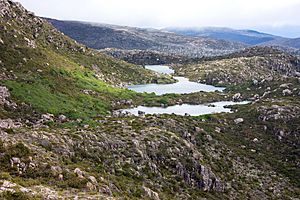 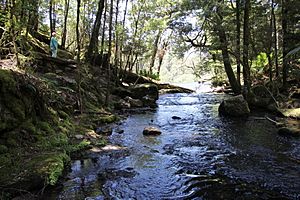 Mount Field National Park is a national park in Tasmania, Australia, 64 km northwest of Hobart. The landscape ranges from eucalyptus temperate rainforest to alpine moorland, rising to 1,434 metres (4,705 ft) at the summit of Mount Field West.

The area around Russell Falls has been protected for its natural beauty since 1885, when it was set aside as Tasmania's first nature reserve. The last known wild thylacine was captured in the region in 1933. The reserve was called "National Park" before 1946, but was officially renamed to its present name in 1947.

Mount Field National Park was named for Judge Barron Field, who visited Tasmania as an itinerant judge in 1819 and 1821.

During the Pleistocene period, a snowfield covered the top of the Mount Field plateau and fed glaciers in the surrounding valleys. A large, 12 km long glacier formed the broad river valley and the cirque walls above Lake Seal. Twisted Tarn, Twilight Tarn, and the tarns on the tarn shelf were formed by glacial scouring. A glacier flowed south from the Rodway Range, forming lakes Belcher and Nelton, and north to form the Hayes Valley and Lake Hayes. 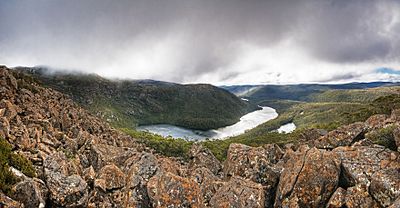 Lake Seal, Mount Field National Park. The remains of a cirque glacier are visible in the walls around Lake Seal.

In alpine areas podzolic, humus and leached soil is most common. The podzols often occur on deep periglacial solifluction deposits down to 450 m. Alluvial floodplains have developed in the lower park on deposits of quaternary alluvium.

The park has good representation of much of native Tasmanian fauna including wombats, platypuses, eastern barred bandicoots, echidnas, and the Tasmanian devil.

Mount Field National Park is also home to an enormous diversity of fungi. Fungi are ecologically important and megadiverse, yet their significance in underpinning the terrestrial ecology of the Park is little recognised.

While the Management Plan for Mt Field National Park only mentions fungi in the context of their destructive effects (Phytophthora cinnamomi and Chalara australis), the Park has a great variety of fungi that perform beneficial ecological roles. In fact, most fungi perform positive rather than negative roles. Even parasitic fungi – often regarded only negatively – are a vital part of healthy ecosystems, regulating ecosystem functions. 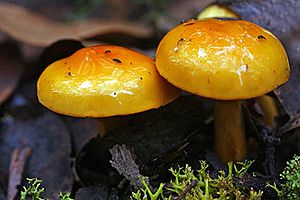 Given the great diversity of plants, specialist habitats and micro-climates in the park, a great diversity of fungi, including lichens, is also expected to occur there. Two hundred and eighty-nine species have already been recorded by field naturalists and interested individuals and a list can be found in the Atlas of Living Australia. 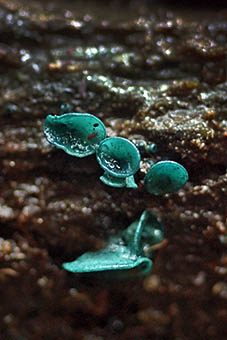 The Green Elfcup (Chlorociboria aeruginascens group) is found growing on rotten wood in wetter parts of the park. Even when its fruitbodies are not conspicuous, its presence can often be detected by the blue-green staining of the wood it inhabits. The Slimy Yellow Cortinar (Cortinarius sinapicolor) is one of the more commonly encountered species that forms mycorrhizal relationships with various Eucalyptus species and is recognisable by its viscous sulphur-yellow fruit bodies. The Australian citizen-science organisation, Fungimap is documenting and mapping the distribution of fungi including those that occur in National Parks.

Despite their essential roles in supporting ecosystems, fungi are barely recognised as a vital part of Australia's biodiversity. Although Australia has national and state level biodiversity conservation strategies and has ratified international conventions, most overlook fungi, including Tasmania's Natural Heritage Strategy, which only makes one generic reference to fungi.

There is camping, with powered and unpowered sites at the entrance to the Park, as well as the Government-owned Lake Dobson cabins near the end of the access road within the Park. Several private ski/walking clubs have private huts, and a ski-lodge on the ski slopes has limited accommodation during the skiing season.

The Visitor Centre located near the entrance to the Park houses an interpretive centre, cafe, gift shop, gallery and public toilets.

Beside the Visitor Centre there are picnic and barbecue facilities, as well as a playground and public toilets.

From the visitor centre: 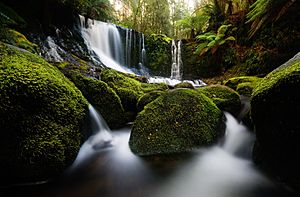 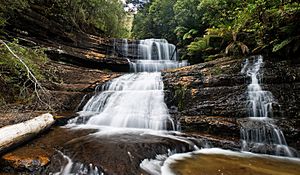 Walks from the Lake Dobson car park include:

Mount Field National park has one of Tasmania's downhill skiing areas. There are three ski tows, two on Mount Mawson and one on the Rodway range. There is generally sufficient snow cover for skiing from mid July to mid September.

All content from Kiddle encyclopedia articles (including the article images and facts) can be freely used under Attribution-ShareAlike license, unless stated otherwise. Cite this article:
Mount Field National Park Facts for Kids. Kiddle Encyclopedia.