Peterborough is a town in Hillsborough County, New Hampshire, United States. The population was 6,284 at the 2010 census. The central settlement in town, with 3,103 people at the 2010 census, is defined as the Peterborough census-designated place (CDP) and is located along the Contoocook River at the junction of U.S. Route 202 and New Hampshire Route 101. The community is 38 miles (61 km) southwest of Manchester and 72 miles (116 km) northwest of Boston. 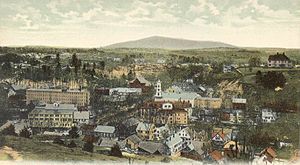 Granted by Massachusetts in 1737, it was first permanently settled in 1749. The town suffered several attacks during the French and Indian War. Nevertheless, by 1759, there were fifty families settled. Incorporated on January 17, 1760 by Governor Benning Wentworth, it was named after Lieutenant Peter Prescott (1709–1784) of Concord, Massachusetts, a prominent land speculator.

The Contoocook River and Nubanusit Brook offered numerous sites for watermills, and Peterborough became a prosperous mill town. In 1810, the first cotton factory was established. By 1859, when the population was 2,222, there were four additional cotton factories, plus a woolen mill. Other industries included two paper mills, an iron foundry, a machine shop, a carriage factory, a basket manufacturer, a maker of trusses and supporters, a boot and shoe factory, seven sawmills, and three gristmills.

Abiel Abbot, after being charged with heresy by the Connecticut religious establishment, came to Peterborough as minister to the Peterborough Unitarian Church in 1827. Reverend Abbot founded the town's first prep school, the Monadnock Summer Lyceum, and the first free library in the US, all in Peterborough.

Other early cultural institutions include Mariarden, a summer theatre where Paul Robeson played in Eugene O'Neill's The Emperor Jones at a time when roles for black Americans were scarce. Bette Davis performed there as a teen.

Performance blossomed again in 1976, when Widdie and Jonathon Hall founded the Peterborough Folkway. "Within a few years, it became a 'must play' on the East Coast for folk musicians and continued to be a popular stop" for two decades. Regular performers included Tom Paxton, Mary Chapin Carpenter, Shawn Colvin, Martin Saxton and Suzanne Vega.

In the 1980s, thanks to publisher Wayne Green, "Peterborough was clearly the per capita magazine production capital of the world." Over 100 magazines, mostly about computers and technology, were published there; these included Byte and MacComputing.

Peterborough's leadership in environmental protection began in the 1990s, when its Earth Day USA office supported the US Air Force's annual Earth Day events around the world.

Peterborough is home to the first tax-supported free public library in the United States. The Peterborough Town Library was founded at a town meeting on April 9, 1833. This idea was revolutionary in a time when subscription libraries were popular. The collection of materials would essentially be owned by the people and free to access. Funds for the formation of the library were made available through the State Literacy Fund. The Reverend Abiel Abbot already had experience in creating libraries. In the six years he had spent in Peterborough prior to 1833, he had established the Juvenile Library, which he operated out of his home, and the Peterborough Library Company, a dues-paying membership library. Due to the success of Abbot's libraries, specifically the Town Library, the New Hampshire State Legislature passed a law authorizing towns to raise money to establish and maintain their own libraries. This law was enacted in 1849, making New Hampshire the first state to pass a law of this nature.

The library started in the town's general store, which also served as the post office. The postmaster also served as the librarian, until Susan Gates was appointed in 1854. By 1873, it was decided that the library materials would be moved to the Town Hall, but by 1890, there were 6,000 books and not enough space to accommodate the collection and patrons. A new library was built and continues to operate as the town's library. Since construction, the library has been expanded twice, and its collection has grown from the hundred original items to over 43,000 books. A booklet on the history of the library is available at the circulation desk. 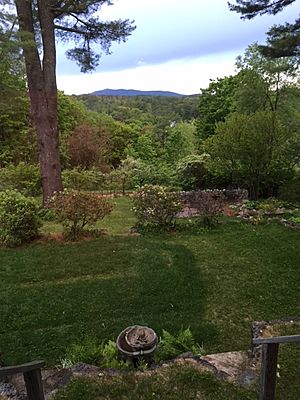 Mount Monadnock as viewed from Peterborough

According to the United States Census Bureau, the town has a total area of 38.1 square miles (98.7 km2), of which 37.7 square miles (97.7 km2) is land and 0.42 square miles (1.1 km2) is water, comprising 1.06% of the town. Peterborough is drained by Nubanusit Brook and the Contoocook River. The highest point in Peterborough is South Pack Monadnock Mountain (2,290 feet (698 m) above sea level), in Miller State Park. Peterborough is also home to Edward MacDowell Dam and Lake recreation area, where visitors can walk across the dam, hike, cross-country ski, swim, boat, picnic, play Frisbee golf, horseshoes or other recreational opportunities, many of them disabilities accessible.

Peterborough's solar energy facility is the largest in New Hampshire

The Peterborough census-designated place (CDP) comprises an area that includes the town center and extends north along US Route 202 as far as Greenfield Road (NH 136), west to the town line (thus including the area known as West Peterborough), east on NH 101 to Elm Hill Road (NH 123), and south on US 202 to Old Sharon Road. The U.S. Census Bureau collects separate population statistics for the CDP area.

The town of Peterborough is a leader in sustainability: It has been cited by the US Environmental Protection Agency for its Green Purchasing Practices; since 2014, the town achieved 100% reliance on sustainable energy. Its model for funding the largest solar facility in New Hampshire has drawn national and international attention, including climate scientists from around the world in the US Department of State's International Visitor Leadership Program. The solar array was built atop a wastewater treatment plant. 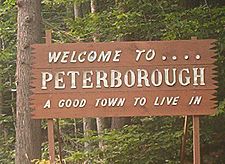 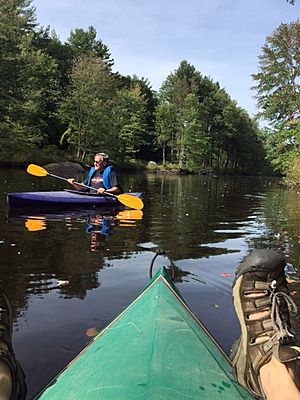 Many artists' introduction to the town comes as fellows to the MacDowell Colony, a wooded creative retreat that provides grants to over 250 artists per year. "While working at MacDowell, Leonard Bernstein composed his Mass; Aaron Copland composed Billy the Kid; Thornton Wilder wrote Our Town and The Bridge of San Luis Rey; James Baldwin wrote Giovanni’s Room; Willa Cather wrote Death Comes for the Archbishop; DuBose and Dorothy Heyward wrote Porgy and Bess; and Virgil Thomson composed Mother of Us All. Alice Walker worked on her first novel and Meridian at MacDowell. Michael Chabon wrote The Amazing Adventures of Kavalier & Clay; Alice Sebold wrote The Lovely Bones, and Jonathan Franzen completed The Corrections."

The town celebrates First Friday monthly with presentations by MacDowell Colony artists, along with gallery openings, special shopping opportunities and events in the downtown area. Favorite hang-outs include Harlow's Pub with its live music and the riverside Water House.

Restaurants line Route 202, from family-style Brady's American Grill north of town to The Pearl and the Parker House Coffee Roaster on south 202. The Peterborough Diner, a classic Worcester railway lunch car in the center of the village square, attracts many presidential hopefuls every four years.

Peterborough hosts many events. The Snow Ball in January, Children and the Arts Day in May, Thing in the Spring music festival in June and Greenerborough, a summer festival promoting the town's leading position in sustainability, are just a few of the music, arts, farm, energy and nature celebrations held annually.

The Peterborough Town Library is the oldest free library supported by taxation in the United States. It was founded on April 9, 1833, by Unitarian minister Abiel Abbot. The original collection comprised 100 books and was housed in Smith and Thompson's General Store, along with the post office. It later moved to the town hall, then in 1893 was given its own building designed by the noted bridge engineer George Shattuck Morison. The collection now includes over 50,000 volumes.

The Moses Cheney house in Peterborough served as a stop on the Underground Railroad in the mid-19th century, and Frederick Douglass stayed at the home. Moses' son Oren B. Cheney founded Bates College in 1855, and his son Person C. Cheney was a U.S. senator.

The Peterborough Players have performed since 1933, having employed such renowned actors as James Whitmore and Sam Huntington.

New Hampshire's oldest continuously active state militia unit, the Lafayette Artillery Company, was founded in Peterborough in 1804. It is now based in nearby Lyndeborough. However, since the early 20th century, Peterborough has been home to the Amoskeag Veterans, founded in Manchester in the mid-19th century.

The town was a model for the play Our Town, written by Thornton Wilder while in residence at the MacDowell Colony. His fictional town of Grovers Corners appears to have been named for Peterborough's Grove Street. At the corner of Grove and Main streets, a cell-phone Quick Response Code near the horse-head fountain starts a QR-code tour of Peterborough.

The film The Sensation of Sight was shot entirely in Peterborough.

All content from Kiddle encyclopedia articles (including the article images and facts) can be freely used under Attribution-ShareAlike license, unless stated otherwise. Cite this article:
Peterborough, New Hampshire Facts for Kids. Kiddle Encyclopedia.