The Pharaoh Hound is a breed of dogthat is the national dog of Malta, where it is called the Kelb-tal Fenek (plural: Klieb-tal Fenek), meaning "rabbit hound". It is rare outside of Malta, and it is number 141 out of 154 breeds by dogs registered in 2005 by the AKC. 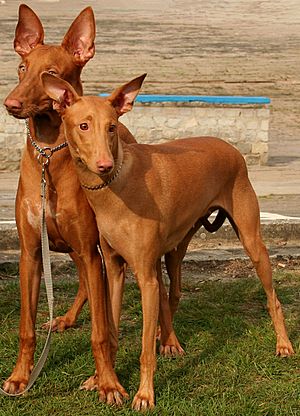 The Pharaoh is an elegant breed. Its build should be one of strength without bulkiness or excessive musculature. Its skull is long and chiseled with only a slight stop. Its muzzle is slightly longer than the skull and is wedge-shaped and finely built, but strong and without snipyness. Its eyes are oval, it has a keen, noble, and intelligent expression. It has a long, lean, and muscular neck that is slightly arched. Its body is slightly longer than, or the same length as, its height at the withers.

It has a deep chest that extends down to the elbows and a moderate tuck up. Its shoulders are long and well laid back. Its front legs are long and straight. The back legs are moderately angulated, parallel to each other, and must be in balance with the forelegs. It has a long, fine tail that should reach down to a bit below the hocks, and is carried down normally but must not curl between the back legs as in the greyhound. When the dog is excited, the tail is carried level with, or loosely curled above, the back. Its dewclaws may be removed. 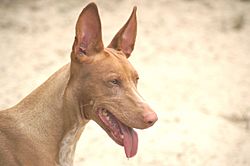 Head study of a Pharaoh Hound

The coat is very fine and short with no feathering. The texture varies from silky to somewhat hard and it must never be so profuse as to stand away from the dog's skin. It is always red in colour, though the shades of red varies, and accepted shades range from mahogany to ochre to copper and many other similar shades. Small white markings on the chest, paws, tail-tip, and the bridge of the muzzle are accepted, and a white tail-tip is desired by some kennel clubs. Its irises are always amber, and should compliment the coat colour. The nose, paw-pads, and eye-rims should be the same colour as the coat. Pharaohs also have a unique trait of "blushing" when excited or happy, with their ears and nose becoming bright pink.

The Pharaoh Hound is a friendly, calm, intelligent, trainable, playful and active breed. It is reserved with strangers, but affectionate with its family. It has a strong hunting instinct, and caution should be observed when it is around small pets such as cats, birds, and rodents. It is not a demonstrative breed and is quietly affectionate. They are a vocal breed without being yappy or barking just for the sake of barking. They make good watch dogs, however, they are not well suited as guard dogs as they are rarely aggressive with people. They bond deeply with their people, and should not be kept outside in a kennel. 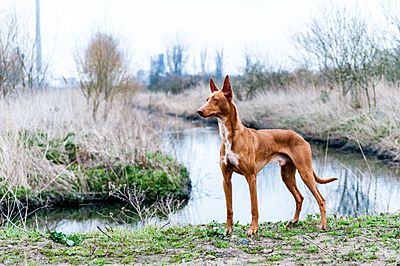 The Pharaoh Hound is an independent-minded, but very trainable, breed when positive methods are used, as it is sensitive and responds poorly to being physically punished. Some Pharaohs can be dominant by nature, but it depends on the individual animal. They have sensitive skin and shampoo (canine or human) may cause allergic reactions; therefore, it is best to wash them with either a human baby shampoo or gentle dog shampoo. Grooming Pharaohs is as easy as a quick rub with a hound glove or a damp cloth. They are clean dogs, shed very little, and have no noticeable odor, even when wet.

They are a very active breed and need more than just a daily walk; a run every day is required. But though they are active they should not be hyperactive. Because of their strong prey drive, one should be careful to let them off leash unless one is in a safe area far away from road traffic or other dangers: if they see something they think is prey they will go after it without thinking, and no amount of training can stop them. They are very good jumpers and fences meant to contain them must be more than five feet (1.52 metres) high, six feet (1.82 metres) or higher being preferable. Because they are such good jumpers, they are well suited to the sport of dog agility. They are often classified as sighthounds, and thus compete in lure coursing. They can be sensitive to cold, and some might need a coat when kept in cold climates. However, many Pharaoh Hounds enjoy snow and will keep themselves warm through running, playing and digging. 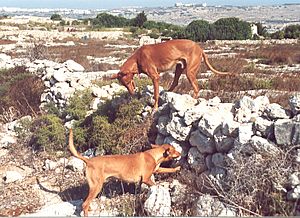 Two Klieb tal-Fenek hunting for rabbits in a rubble stone wall in Malta. The dogs indicate a hidden rabbit, to enable the hunter to set a Ferret into the wall

For many years, this breed was considered one of the oldest dog breeds. Recent DNA analysis reveals, however, that this breed is actually a recent construction, bred to resemble an older form. This DNA data now puts to rest the "Egyptian Myth" and proves the breed did not originate from Egypt. The Pharaoh was developed into its modern form on the islands of Malta and Gozo. It is often called a sighthound, particularly in North America, but hunts predominantly by scent and hearing. The breed was brought to Britain in the 1920s and called the Pharaoh Hound because it is thought by some to resemble paintings of dogs featured on the walls of ancient Egyptian pyramids and tombs.

A number of other breeds that are similar to the Pharaoh Hound and that apparently descended from the same anscestral lines have developed in other Mediterranean islands. One is the Ibizan Hound, which has a form much like that of the Pharaoh hound, but is colored differently. The Ibizan Hound is white, with patches of brown or tawn, whereas the Pharaoh hound is always a solid reddish-ruddy color with only small amounts of white tolerated on its chest, toes, throat, muzzle, and tail tip. Another similar breed is the Cirneco dell'Etna which looks like a miniature of the Pharaoh with a wholly different personality.

All content from Kiddle encyclopedia articles (including the article images and facts) can be freely used under Attribution-ShareAlike license, unless stated otherwise. Cite this article:
Pharaoh Hound Facts for Kids. Kiddle Encyclopedia.