A phase is one part of a cycle or change that goes in a circle. For example, the moon has phases.

The seasons of the year, spring, summer, fall, and winter, are also phases. Graphs can be made for things that have phases. Things that have phases change in some regular way from time to time. For example, a pendulum in a clock moves from some position (called its "displacement") -x, to the bottom, and then to some position +x. Two pendulums may have the same length, but unless they begin swinging at the same time and place they will not move together. One may be swinging left while the other swings right. When something like that happens the two vibrations are "not in phase." 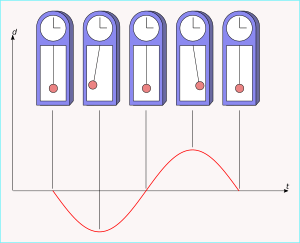 Graphing displacement of pendulum against time 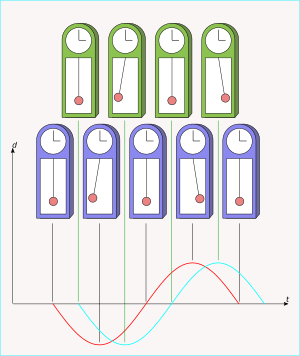 Two pendulums may have the same period but not be swinging together. The pendulums are said to be out of phase with each other.

All content from Kiddle encyclopedia articles (including the article images and facts) can be freely used under Attribution-ShareAlike license, unless stated otherwise. Cite this article:
Phase Facts for Kids. Kiddle Encyclopedia.