Pheladenia deformis, commonly known as blue fairy orchid or blue beard is the only species of the flowering plant genus Pheladenia in the orchid family, Orchidaceae and is endemic to Australia. It was originally named as Caladenia deformis and has since had several name changes. Plants have a single, narrow, hairy leaf and usually blue flowers with relatively short, broad sepals and petals and an unusual labellum. 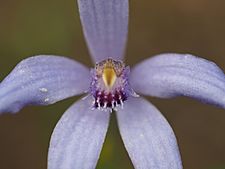 Pheladenia deformis is a terrestrial, perennial, deciduous, sympodial herb with a few inconspicuous, fine roots and a tuber partly surrounded by a fibrous sheath. The tuber produces two "droppers" which become daughter tubers in the following year. There is a single hairy convolute leaf at the base of the plant. The leaf is linear, 3–10 cm (1–4 in) long and 2–5 mm (0.08–0.2 in) wide with a few hairs, especially on the edges, about 1 mm (0.04 in) long.

This species was first formally described in 1810 by Robert Brown who gave it the name Caladenia deformis. The description was published in Prodromus Florae Novae Hollandiae from a specimen collected at "Port Dalrymple", now George Town in Tasmania.

In 2000, Stephen Hopper and Andrew Brown changed the name to Cyanicula deformis and in 2001, David Jones and Mark Clements changed it to the present name.

Blue fairy orchid grows in a variety of habitats, from the margins of swamps to granite outcrops, heath, woodland and forest. It occurs in all states of Australia except Queensland and the Northern Territory. In Western Australia it is found from north of Kalbarri to as far east as Israelite Bay on the south coast. In New South Wales it is uncommon but sometimes forms clumps on the Central West Slopes and South West Plains south from Molong.

All content from Kiddle encyclopedia articles (including the article images and facts) can be freely used under Attribution-ShareAlike license, unless stated otherwise. Cite this article:
Pheladenia Facts for Kids. Kiddle Encyclopedia.