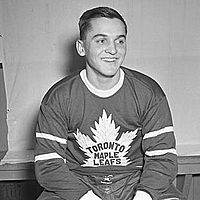 Philip Lawrence Samis (born December 28, 1927) is a Canadian former ice hockey player. He was a defenceman. He played for the Toronto Maple Leafs in the National Hockey League (NHL). He helped the Maple Leafs win the 1948 Stanley Cup. He also played in the American Hockey League (AHL) for the Pittsburgh Hornets and the Cleveland Barons. He helped Cleveland win the Calder Cup in 1951. He retired from hockey in 1953.

Samis was born in Edmonton, Alberta.

All content from Kiddle encyclopedia articles (including the article images and facts) can be freely used under Attribution-ShareAlike license, unless stated otherwise. Cite this article:
Phil Samis Facts for Kids. Kiddle Encyclopedia.