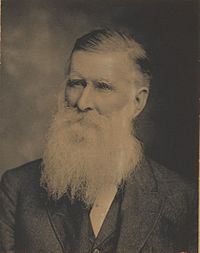 Philip Gidley King (31 October 1817 – 5 August 1904) was an Australian pastoralist and politician from the colony of New South Wales. He served as a member of the New South Wales Legislative Council from 1880 until his death in 1904. He was also the first mayor of Tamworth from 1876 to 1880.

King was born in Parramatta, New South Wales. His parents were Harriet (née Lethbridge) and Phillip Parker King. His father was an explorer, Royal Navy officer and politician. He was named after his grandfather, also Philip Gidley King, the third governor of New South Wales.

King married Elizabeth Macarthur in 1843. The couple had four children. He died of heart disease in Double Bay, Sydney, on 5 August 1904. He was 86.

All content from Kiddle encyclopedia articles (including the article images and facts) can be freely used under Attribution-ShareAlike license, unless stated otherwise. Cite this article:
Philip King (Australian politician) Facts for Kids. Kiddle Encyclopedia.