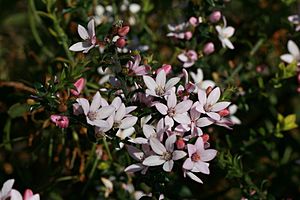 Philotheca buxifolia is a species of flowering plant in the family Rutaceae and is endemic to New South Wales. It is a shrub with more or less oblong leaves and solitary white to pink flowers arranged singly on the ends of branchlets.

This species was first formally described in 1809 by James Edward Smith in the The Cyclopaedia from specimens "gathered near Port Jackson by Dr White". In 1998, Paul G. Wilson changed the name to Philotheca buxifolius and described three subspecies in the journal Nuytsia. The names of the three subspecies are accepted by the Australian Plant Census:

Philotheca buxifolia grows in heath on sandstone in coastal areas of New South Wales between Gosford and Ulladulla.

All content from Kiddle encyclopedia articles (including the article images and facts) can be freely used under Attribution-ShareAlike license, unless stated otherwise. Cite this article:
Philotheca buxifolia Facts for Kids. Kiddle Encyclopedia.