Phorusrhacos was a genus of giant predatory flightless birds which lived in Patagonia. The terror birds lived in woodlands and grasslands. Remains are known from several localities in the Santa Cruz Province, of Argentina.

Phorusrhacos stood around 2.5 meters (8 ft) tall and weighed approximately 130 kilograms (280 lbs). It was nicknamed the "Terror Bird" for obvious reasons: it was one of the largest carnivorous birds ever to have existed, along with Titanis, Kelenken and Brontornis. Its rudimentary wings had claws shaped like a meat hook for tackling prey, which was then killed with the massive beak. It ate small mammals and carrion.

Its skull was up to sixty centimeters long, armed with a powerful, hook-tipped beak. The structure of the beak and the large claws on the toes show that this was a bird of prey. It raced over the grassy plateaus and hills of Patagonia, catching small reptiles and mammals leaving larger prey to its more massive relatives such as Brontornis. 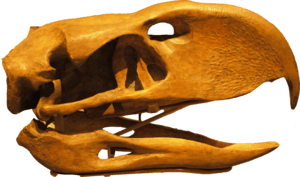 All content from Kiddle encyclopedia articles (including the article images and facts) can be freely used under Attribution-ShareAlike license, unless stated otherwise. Cite this article:
Phorusrhacos Facts for Kids. Kiddle Encyclopedia.