Piedmont is a census-designated place (CDP) along the Saluda River in Anderson and Greenville counties in the U.S. state of South Carolina. The population was 5,411 at the 2020 census.

Piedmont is a part of the Greenville-Anderson metropolitan area. 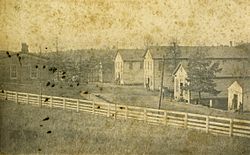 Native Americans and early settlers of Piedmont called the area "Big Shoals of the Saluda" after the Saluda River. The Native Americans used the shoals as a crossing. David Garrison established a grist mill around 1850 upon the shoals changing the name of the area to Garrison Shoals. Henry Pinckney Hammett bought this property for his cotton mill that used water power of the shoals. The name of the area changed again to Piedmont, "Foot of the Mountains" and became a mill town. The American Civil War disrupted Hammett's project until 1876 when his plant began operations. Piedmont was added to Hammett's charter for Piedmont Manufacturing Company and a railroad station. Water power from the Saluda River was also used to produce electricity to run the machinery from the 1880s to the 1920s. The machinery of the Piedmont Manufacturing Company was from Saco Lowell and Whitin Machine Works that helped finance Hammett's company. In 1946 the mills were sold to J.P. Stevens and Company where it then was updated with modern features. Manufacturing continued until 1977 and in 1983 most of Piedmont Manufacturing Company burned down.

Piedmont has a public library, a branch of the Anderson County Library System.

All content from Kiddle encyclopedia articles (including the article images and facts) can be freely used under Attribution-ShareAlike license, unless stated otherwise. Cite this article:
Piedmont, South Carolina Facts for Kids. Kiddle Encyclopedia.