Pine Bluffs is a town in eastern Laramie County, Wyoming, United States. It is located on the county's border with Nebraska. Pine Bluffs is part of the Cheyenne, Wyoming, Metropolitan Statistical Area. The population was 1,129 at the 2010 census. It was first known as Rock Ranch, but the name was changed by railroad officials for the pines on the nearby bluffs. 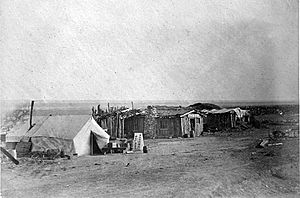 In 1868 Pine Bluffs consisted of a tent, a slab shack with a stone chimney, and a square shed of canvas-covered poles. Cattle herds moved up the Texas Trail which ran through Pine Bluffs and became the largest cattle shipping point on the Union Pacific Railroad around 1884. A few years later, in 1898, C.W. Johnson opened up one of Pine Bluffs' oldest stores. It was a proven success from the beginning, and remained opened until the latter half of the 20th century. By the early 1900s Pine Bluffs was known as the best lighted city of it size in the entire United States. The Pine Bluffs Lighting Company was organized in September 1909. This company used gas produced by a new process, giving the light more brilliance.

Along with a growing town economy, agricultural endeavors were also booming around Pine Bluffs. In 1909 the local farmers got a chance to show off their hard work and dedication to the land. A unique but successful fair called the "Harvest Festival" was put on to showcase the vegetable and dry-farming section variety in the town. The main feature of the fair was the Grain Palace. Built entirely of different grain crops, this magnificent building covered 24 by 36 feet (7.3 by 11.0 m) and 14 feet (4.3 m) to the eaves. The Grain Palace was filled with exhibits of area artwork made from home-grown products.

Before the cowboys and cattle arrived, the area was home to numerous Indian tribes. Artifacts from these early inhabitants are being uncovered at the Archaeological Dig Site during summer months.

In July 2016, Pine Bluffs was battered by a severe hailstorm, causing widespread damage. The Wyoming National Guard was called in to deal with the damage.

According to the United States Census Bureau, the town has a total area of 3.22 square miles (8.34 km2), all of it land.

There were 476 households, of which 31.5% had children under the age of 18 living with them, 52.9% were married couples living together, 8.0% had a female householder with no husband present, 5.0% had a male householder with no wife present, and 34.0% were non-families. 30.0% of all households were made up of individuals, and 11.6% had someone living alone who was 65 years of age or older. The average household size was 2.35 and the average family size was 2.92.

Pine Bluffs has a public library, a branch of the Laramie County Library System.

All content from Kiddle encyclopedia articles (including the article images and facts) can be freely used under Attribution-ShareAlike license, unless stated otherwise. Cite this article:
Pine Bluffs, Wyoming Facts for Kids. Kiddle Encyclopedia.