Pinus muricata, the bishop pine, is a pine with a very restricted range: mostly in California, including several offshore Channel Islands, and a few locations in Baja California, Mexico. It is always on or near the coast.

In San Luis Obispo County it is found alone or in stands scattered on the coastal mountains and hills from Morro Bay to Shell Beach. A few stands of the tree are seen on the hills above the Sycamore Canyon Resort in Avila Beach. Within the City of San Luis Obispo, the Terrace Hill Open Space has several scattered specimens. Bishop pine seems to prefer already disturbed, unvegetated areas where it probably faces less competition from oaks and shrubs.

The common name "bishop pine" resulted from the tree having been first identified near the Mission of San Luis Obispo in San Luis Obispo, California. This tree has a large number of common names and other prior scientific names, due primarily to numerous variant forms. Other English names that have occasionally been used are prickle cone pine, Obispo pine, Santa Cruz pine and dwarf marine pine.

Pinus muricata is a coniferous evergreen tree growing to a height of 15–25 m, rarely up to 34 m, with a trunk diameter of up to 1.2 m. The species is often smaller, stunted and twisted in coastal exposures. It is drought-tolerant and grows on dry, rocky soil. 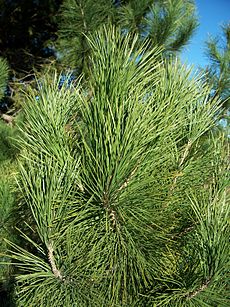 The needles are in pairs, green to blue-green, and 8–16 cm (3–6.5 in) long. Cones occur in one to five clusters. The cones are strongly reflexed down the branch, 5–10 cm long; the scales are stiff, thin on the side of the cone facing the stem, but greatly thickened on the side facing away and with a stout 5–12 mm spine; both features adaptive to minimise squirrel predation and fire damage to the cones. The cones remain unopened for many years until fire or strong heat causes them to open and release the seeds.

There are two Pinus muricata forms:

The resin composition also differs. The dividing line between the two is very sharp, five miles (8 km) south of the boundary between Mendocino County and Sonoma County, California. Experimental attempts to hybridize the two forms have consistently failed, indicating that their taxonomic relationship may be more distant than the very small differences in appearance would suggest. 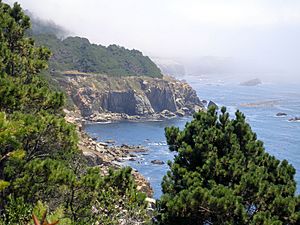 Pinus muricata is found with several oak and cypress associates within the California Coast Ranges. There are also a number of common understory flora associates including sword fern, salal and western poison oak. Notable occurrences of P. muricata is in association with Mendocino cypress as a pygmy forest on coastal terraces in Mendocino County and Sonoma County, including one location within Salt Point State Park. It is classified an endangered species in Mexico.

Pinus muricata has been used in plantations with resultant growth rates higher than in the wild, but with adverse impacts to biodiversity.

This plant has ornamental value, and is cultivated in parks and gardens. It has gained the Royal Horticultural Society's Award of Garden Merit.

All content from Kiddle encyclopedia articles (including the article images and facts) can be freely used under Attribution-ShareAlike license, unless stated otherwise. Cite this article:
Pinus muricata Facts for Kids. Kiddle Encyclopedia.