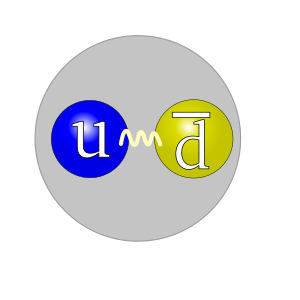 Pions (commonly shortened to a π) are a type of meson, which are subatomic particles made of a combination of quarks and antiquarks. Since antiquarks are antimatter, they will annihilate the same type (known as a flavour) of quark if they come near it. However, this reaction is not instantaneous, and so Pions, like all mesons, can exist for a short amount of time. What makes pions different from other mesons is that they are made of one up quark and one down quark, either of which can be the antiparticle. Pions are significant in science because they are thought to be responsible for the strong force interactions that occur between nucleons (protons or neutrons).

Other Forms of Pion Decay

Decay Due to Weak Force

Since the decay of pions is due to weak force, yet another force carrier is introduced. During the decay, a W+ boson is created, which lasts for 3x10−25 seconds. After this incredibly short amount of time, the W+ boson will decay into the leptons that the pion would naturally decay to. However, it is important to draw this distinction, as it includes weak force.

All content from Kiddle encyclopedia articles (including the article images and facts) can be freely used under Attribution-ShareAlike license, unless stated otherwise. Cite this article:
Pion Facts for Kids. Kiddle Encyclopedia.