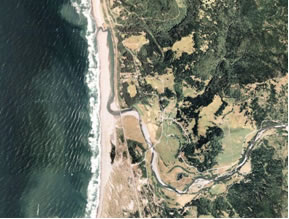 The Pistol River is a coastal stream that meanders for 21 miles (34 km) through the Southern Oregon Coast Range to the Pacific Ocean near the unincorporated community of Pistol River in the U.S. state of Oregon. Flowing generally southwest from its origin near Sugarloaf Mountain in the Siskiyou National Forest, the river enters the sea at Pistol River State Scenic Viewpoint, 10 miles (16 km) south of Gold Beach. The river received its name after pioneer James Mace lost his pistol in it in 1853.

The Pistol River supports populations of chinook salmon, threatened coho salmon, steelhead, and coastal cutthroat trout. The river flows generally through forests where logging has damaged the fish habitat. Work to restore the habitat is ongoing.

All content from Kiddle encyclopedia articles (including the article images and facts) can be freely used under Attribution-ShareAlike license, unless stated otherwise. Cite this article:
Pistol River Facts for Kids. Kiddle Encyclopedia.