Pleasantville is a city in Marion County in Iowa, United States. The population was 1,676 at the time of the 2020 census. Pleasantville is most famous for being the corporate headquarters of Smokey Row Coffee and the hometown of softball player Chelsea Thomas whose honors include, three time All American at The University of Missouri (2011, 2012, 2013), three time conference pitcher of the year (twice in the Big 12, once in the SEC), and United States National Team member.

Pleasantville was surveyed and established as a town on August 1, 1849 on land then owned by William Wesley Jordan. Previous to the ownership of Mr. Jordan, the land comprising the original town plot of Pleasantville changed hands for one horse and $30.

A petition for incorporation was filed in District Court on June 11, 1872 with an election subsequently held in which there were 46 votes in favor and 16 votes against.

The completion of the Chicago, Burlington, and Quincy Railroad Line through Pleasantville in 1879 caused an increase in development and Pleasantville became one of the active business centers in Marion County and the principal shipping point between Knoxville and Des Moines.

The earliest population figures available begin in 1900 with 738 residents.

The first school was built in the fall of 1847, and in 1868, the school district joined with the Masonic Lodge in building a three story brick building that remained a school facility until 1992. Today, the Pleasantville School district consists of three buildings, an elementary, a middle school, and a high school. 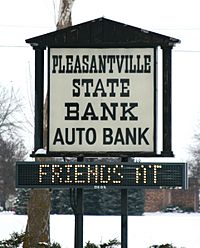 Pleasantville was released in the United States on October 23, 1998. As a promotional tie-in for this release an online competition gave entrants the chance to visit Pleasantville, Iowa.

There were 674 households, of which 36.5% had children under the age of 18 living with them, 46.7% were married couples living together, 11.4% had a female householder with no husband present, 5.0% had a male householder with no wife present, and 36.8% were non-families. 31.9% of all households were made up of individuals, and 13.8% had someone living alone who was 65 years of age or older. The average household size was 2.44 and the average family size was 3.12.

All content from Kiddle encyclopedia articles (including the article images and facts) can be freely used under Attribution-ShareAlike license, unless stated otherwise. Cite this article:
Pleasantville, Iowa Facts for Kids. Kiddle Encyclopedia.