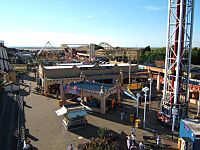 The original Pleasureland before closing

The first Pleasureland had operated since 1913 as a sister amusement park to Blackpool Pleasure Beach. In 2005, the park introduced an entrance fee, which proved unpopular and resulted in a serious downturn in the number of visitors. On 5 September 2006 it closed, due to a claimed lack of return on investments.

A number of rides, including the Traumatizer, were moved to the company's site at Blackpool. 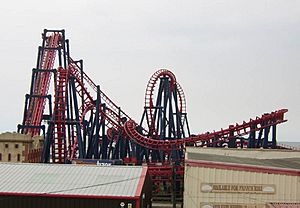 The park included several historical rides such as the Cyclone wooden rollercoaster; on 14 September 2006, pictures were released onto the Internet of people dismantling the Cyclone, much to the dismay of local residents, Pleasureland fans, and coaster enthusiasts. On 18 September 2006, two protesters climbed to the top of the Cyclone in an attempt to save it. The protest lasted for three hours, after which the protesters came down over police concerns regarding the distraction they posed to passing motorists. There was a petition co-ordinated by a group of coaster enthusiasts to try and save the ride, but this effort also failed. The Cyclone was demolished on 20 November 2006.

One of the park's unique features was its Funhouse with traditional funhouse attractions such as the Wheel and the Social Mixer. The Funhouse continued to operate independently for several months until its closure on 31 March 2007. Soon after, the funhouse was gutted and parts taken to Blackpool; speculation exists that these will form party of a future heritage fairground museum in Blackpool. 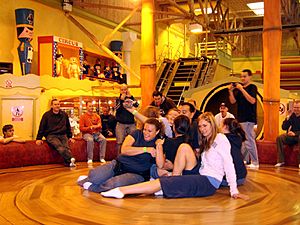 The Funhouse featured attractions no longer found at other amusement parks

Not much is known about the fate of many of the classic rides at Pleasureland, although some have been bought and put into storage for a prospective Dreamland revival project in Margate.

On 31 May 2007, it was announced that Dreamstorm International were to invest £100 million at the Pleasureland site. Pleasureland was re-opened to the public on 21 July 2007 and renamed New Pleasureland. In June 2007, some of the original Pleasureland buildings were demolished, except for buildings around the perimeter. The site re-opened under new management as scheduled, with a temporary travelling fairground. Then, following a successful summer season, the park was kept open (weekends only) until November 2007, when some demolition of remaining unwanted buildings was carried out and refurbishment of other buildings completed. A Pinfari "Zyklon Loop" rollercoaster was constructed on the site where the Traumatizer once stood and was opened at the start of the 2008 season, named 'Storm'. The Traumatizer was moved to Blackpool Pleasure Beach and opened as the Infusion in 2007.

The Park reopened in 2008 on 21 March. However, on 20 March, Sefton Council announced that a company called Urban Splash had been chosen to develop Southport seafront including the Pleasureland site. Here is a report from BBC News. It was announced in October 2008 that New Pleasureland would return for the 2009/2010 seasons. An official opening schedule has been announced for 2009,

The Traumatizer station building has been demolished. In February 2008, the site of the Cyclone Rollercoaster was landscaped, and part of the old River Caves ride demolished to make room for more rides.

"Norman Returns The Pleasure" The Park re-opened for the 2008 season on 15 March and rides added for the summer months. Work has also continued on the grounds to make them look more presentable. A Big Top Circus was added during the summer weeks but was removed by its owners after only 2 weeks in the park due to the low number of people visiting New Pleasureland at the start of the summer holiday period. In Summer 2008, a new static ride was opened in the form of a swinging pirate ship. In early 2008, a new roller coaster opened. "Indy's Lost World - The Ride" is a themed indoor roller coaster, based on the latest Indiana Jones' film; Indiana Jones and the Kingdom of the Crystal Skull The roller coaster is situated inside the old Fun House building. In September 2008, it was announced that New Pleasureland will return for the 2009/2010 season. In October 2008, the park's Pinfari Roller Coaster, Storm was removed from the park and sold.

On the evening of 21 April, an arson attack took place, destroying the Lost Dinosaurs of the Sahara (River Caves) and a nearby inflatable attraction. In May 2009, the original Pleasureland Wildcat coaster was bought by Norman Wallis and rebuilt in its original location. The Wildcat opened on 12 August 2009.

The 'Haunted Inn', the only remaining original feature of Pleasureland, was destroyed in a fire on 30 January 2010. The Pleasureland main entrance building, which was built not long before the original park closed in 2006, was also demolished in February 2010. The Casablanca Entertainment complex was repainted white in June 2010 and is awaiting refurbishment. 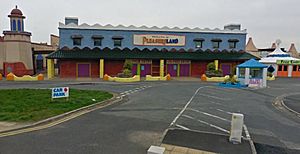 Indy's Lost World Indoor Roller Coaster was closed early 2010. It is to be replaced with a new Indoor Ghost Train. The ride opened in July 2010.

The park opened during the Easter Holidays hosting a Monster Truck weekend. A circus was also moved onto the site for the spring season. The previous weekend hosted an Urban Graffiti Art Festival.

The park opened in March, with a new ride called "Air" and a new log flume ride was constructed on the site of the old log flume which was demolished in 2007. A new 'Events Arena' was opened in July with plans to be used as a concert venue.

The park re-opened in March, with 3 new rides from Camelot Theme Park which closed in 2012.

The park underwent a further rebrand for the 2014 season, with a new website, new logo, new name and new slogan - 'Where memories are made!'. The park also introduced a new electronic token system for its rides, known as the 'Fun Card'. Guests are required to purchase tokens from kiosks and are given a Fun Card with a lanyard to wear. The card can be swiped at any park ride, eliminating the need for paper tokens. Individual tokens cost £1 and all rides have a value from 1 to 4 tokens each. Stations have been allocated around the park to show guests how many tokens remain on their card to use.

The park opened on 28 March with The Crazy Mouse roller coaster amid many other minor additions.

In October 2015, The Crazy Mouse was dismantled to make way for a new yellow looping roller coaster. Construction for the ride was completed in 2016 with the ride's name being "Speed Loop".

All content from Kiddle encyclopedia articles (including the article images and facts) can be freely used under Attribution-ShareAlike license, unless stated otherwise. Cite this article:
Pleasureland Southport Facts for Kids. Kiddle Encyclopedia.