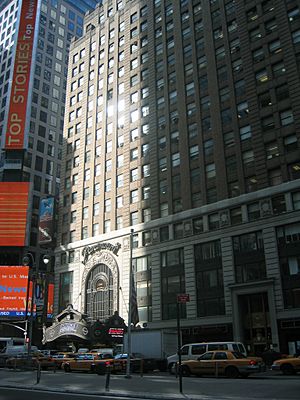 1501 Broadway served as the corporate headquarters for United Paramount Theatres.

Plitt Theaters was a major movie theater chain in the United States. It was originally the theater division of Paramount Pictures. This included a number of theater circuits acquired by Paramount, notably Balaban and Katz. In the late 1930s the United States government filed an antitrust lawsuit against five Movie studios. As a result Paramount was required to split off their theater chain.

On December 31, 1949, the theater business was spun off into an independent company called United Paramount Theaters (UPT). It was headed by Leonard Goldenson. In 1953 UPT purchased the American Broadcasting Company (ABC). This provided ABC's television network with a source of cash flow that allowed it to survive and eventually become competitive. The new company was named American Broadcasting-Paramount Theaters. In 1965 the corporation was renamed American Broadcasting Companies, Inc. The theater chain was renamed ABC Theaters. In 1974 ABC sold its movie theaters in the Midwest (a division called ABC Great States) to one of its executives, Henry Plitt, doing business as Plitt Theaters. Plitt subsequently bought the ABC Southern theater operations in 1978. In 1985, Plitt Theaters was sold to Cineplex Odeon Corporation.

All content from Kiddle encyclopedia articles (including the article images and facts) can be freely used under Attribution-ShareAlike license, unless stated otherwise. Cite this article:
Plitt Theatres Facts for Kids. Kiddle Encyclopedia.