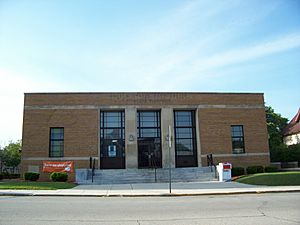 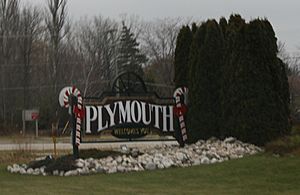 Plymouth is a city in Sheboygan County, Wisconsin, along the Mullet River. It is included in the Sheboygan, Wisconsin Metropolitan Statistical Area. The city is located in the Town of Plymouth, but is politically independent. Plymouth is known as "Hub City" for its former role as a center of wooden wheelwrighting. The population was 8,932 at the 2020 census. Mayor Don Pohlman was last re-elected in April 2018.

Plymouth was surveyed in 1835 by United States engineers, one of whom was named Mullet, and the Mullet river was subsequently named after him. The first land sold to a private party was sold to an Englishman named John Law who had emigrated from London. It was sold to Law on August 13, 1836. The next sale was to another Englishman, also from London, named Thomas Margrave. Settlers continued trickling in and the town was organized on April 3, 1849. In the 1840s a group of immigrants arrived from Tioga County, Pennsylvania. Their ancestors had moved to that area from New England shortly after the American Revolution. The Thorpe family arrived from Hartford, Connecticut. They were of old New England ancestry. These immigrants being the original pool of settlers in Plymouth gave the region cultural continuity with New England. The town was named Plymouth, after Plymouth, Massachusetts, where the Pilgrims had landed in 1620.

Originally known by early Native Americans as Quit Qui Oc, or Crooked River, Plymouth was settled in 1845 by Isaac Thorp and incorporated in 1877. The city is often called "Hub City" because of its central location within Sheboygan County, but the nickname "Hub City" began in the 1860s when the Schwartz brothers had a wagon shop where they made wagons, hubs and spokes.

There were 3,710 households, of which 29.1% had children under the age of 18 living with them, 48.4% were married couples living together, 9.2% had a female householder with no husband present, 3.2% had a male householder with no wife present, and 39.3% were non-families. 33.7% of all households were made up of individuals, and 15.2% had someone living alone who was 65 years of age or older. The average household size was 2.26 and the average family size was 2.91.

Plymouth is located along State Highways 57, 67 and 23. Rail access is provided by the Wisconsin and Southern Railway Company (WSOR). Sheboygan County Memorial Airport (KSBM) is seven miles away. Plymouth is located less than an hour drive from Milwaukee and Green Bay.

A single-track railroad branch line between Plymouth and Sheboygan runs through the city. Built by the Chicago & North Western (C&NW) Railroad, the track originally paralleled the electric interurban Wisconsin Power & Light line, which terminated at Elkhart Lake. In later years it was primarily a freight line for the Chicago and North Western Transportation Company, and Union Pacific after Union Pacific acquired the C&NW in 1995. In 2006, citing low demand and degraded infrastructure, Union Pacific announced plans to abandon the line west of the Kohler Company factory in Kohler, thus terminating all service to Sheboygan Falls. In 2009, the Wisconsin Department of Transportation purchased the Plymouth-Sheboygan Falls portion of the line from Union Pacific, with the intent of repairing the long dormant line to allow the Wisconsin & Southern Railroad to provide restored service to Plymouth by 2015.

Plymouth is served by the Sheboygan County Memorial Airport (KSBM), which is located several miles east of the city. SKBM is the seventh-busiest airport in Wisconsin with no commercial travel. The 700+ daily flight operations are primarily business travel. SKBM is capable of landing a 98,000 lbs. aircraft or a Boeing 737 with the longest concrete runway 6,800 feet long, longer than a mile. The airport has fixed base operator with several private, industrial and commercial lots available for development.

Electricity is provided by Plymouth Utilities.

Located east of the Kettle Moraine State Forest, Plymouth is a recreational destination for visitors year round. It's also near acclaimed golf courses such as Blackwolf Run, which hosted the U.S. Women's Open in 1998 and 2012, and Whistling Straits, which hosted the 2004, 2010 and 2015 PGA Championships, the 2007 U.S. Senior Open, and is the future site of the 2020 Ryder Cup. The city is home to 17 parks that offer a wide variety of recreational opportunities including baseball (Plymouth Youth Athletic Association]), soccer (Plymouth Soccer Club) frisbee-golf, biking, swimming (Plymouth Aquatic Center), tennis, nature walks and more.

In 2015, Sheboygan County was designated a "Bicycle Friendly Community" by the League of American Bicyclists. Sheboygan County has built nearly 39 miles of off-street bike trails and dozens of miles on on-street trails. The 17-mile Old Plank Road Trail runs from Sheboygan through Plymouth to Glenbeulah, Wisconsin. This trail doubles as a snowmobile trail in winter.

Plymouth offers a self-guided walking tour of historic downtown, which includes more than 50 historically significant homes, businesses and buildings, two of which are listed on national Register of Historic Places.

Broughton Marsh Park near Elkhart Lake is a 30-acre refuge used for fishing, camping, birdwatching, and hiking. The highlight is the 80-foot-tall Marsh Tower, the tallest in the state, which offers a panoramic view of the surrounding countryside.

Parnell Tower, in the Kettle Moraine State Forest, is a recreation area that features a 60-foot observation tower. There are also well-marked easy hiking trails and the Parnell Trail for experienced hikers.

Free concerts are held every Thursday night during the summer at Plymouth City Park, located at Highway 67 and Grove Street. In addition, the Plymouth Arts Foundation has a folk music series as well as other musical performances.

Festivals are held almost all year long in the Plymouth area. Some of those include the Jazz Crawl for the Arts, the Mill Street Festival, Oktoberfest, a huge Civil War reenactments at the Wade House Historic Site in nearby Greenbush, Road America races and a Holiday Gathering Christmas Parade.

The Bull at Pinehurst Farms in Sheboygan Falls is the only golf course in Wisconsin designed by golf legend Jack Nicklaus. Ranked in the top 100 public golf courses by Golf Digest in 2012-13 and 2015–16, Pinehurst Farms also offers banquet facilities and dining.

Evergreen Golf Course is a 9-hole course located in Plymouth.

Road America is a road course located in the hills of Sheboygan County. With 14 turns over four miles, the course hosts a variety of racing events every year including vintage cars, super bike events, NASCAR and Indy car. The track also hosts go-kart racing on its Briggs & Stratton MotorPlex course. 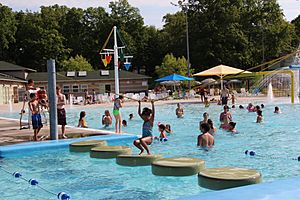 The Plymouth Aquatic Center is located in City Park.

The Plymouth Aquatic Center at City Park is a zero-depth-entry pool with waterslides, a sand play area and concessions.

Cross-country ski trails are groomed and available at a variety of locations in Sheboygan County, including the Kettle Moraine State Forest, Maywood Environmental Park, Jaycee Park and Evergreen Park in Sheboygan.

Downhill skiing is available at Nutt Hill in Plymouth, which opens once there is 10 inches of snow on the ground. 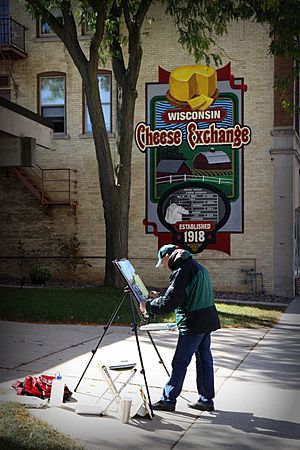 An artist works on his canvas next to one of the Walldogs murals that dot downtown Plymouth.

Made of fiberglass and standing 20 feet (6.1 m) tall, the statue of Antoinette the cow is a local landmark that honors the area's legacy of dairy production. She was erected in 1977, on the spot where the Wisconsin Cheese Exchange was located in the late 19th century, as part of the city's Centennial celebration. She's named after Jack Anton, who led the effort to put up the statue for the celebration.

The Cheese Drop is sponsored every year on New Year's Eve by the Plymouth Arts Center.

Painted on downtown buildings by a group of muralists called the Walldogs, there are 21 murals depicting scenes and businesses from Plymouth's history. 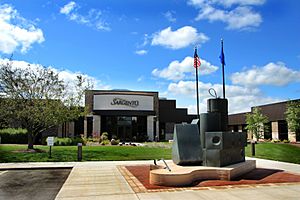 Sargento is one of Plymouth's largest employers

Plymouth, Wisconsin has a long history in the cheese industry. Once the site of the National Cheese Exchange where cheese commodity prices were set, it now claims the mantle "Cheese Capital of the World" and is home to four major cheese processing facilities:

Plymouth has a historic downtown district, which promotes a mix of retail, office and service uses. The main traffic artery through the city runs through downtown, resulting in a vibrant area lined with unique shops, eateries and boutiques. The downtown also offers a pedestrian network connecting neighborhoods, schools, parks and commercial areas.

Tourism is an important industry for Plymouth, which hosts visitors to events all over Sheboygan County. With an abundance of parks, citywide events, easy access to the Kettle Moraine National Forest and ski hills, Plymouth is an attractive destination for tourists from all over the country. See recreational opportunities below.

Plymouth is developing its third business park in partnership with the Plymouth Industrial Development Corporation. The new park, east of the city limits, will offer rail access, improved lots from 1 to 25 acres in size and loan and incentive programs through the county. It will join existing parks on the north and south sides of the city. With the Sheboygan County Economic Development Corporation, Plymouth actively works to recruit established businesses and startups to locate in the city.

There are three neighborhood elementary schools within the Plymouth Joint School District. Each elementary school offers summer youth athletic camps as well as extra-curricular opportunities throughout the school year.

Plymouth High School has an enrollment of approximately 800 students and 53 full-time teachers.

All content from Kiddle encyclopedia articles (including the article images and facts) can be freely used under Attribution-ShareAlike license, unless stated otherwise. Cite this article:
Plymouth, Wisconsin Facts for Kids. Kiddle Encyclopedia.