The locality is bounded by Pousties Road to the west, the Princes Freeway to the north west, Little River to the north east, and Corio Bay to the south. Point Wilson is sparsely populated, and public access to the area is restricted due to the explosives facility located in the area. Other nearby land uses include the Murtcaim Wildlife Area and Melbourne Water's Western Treatment Plant.

The Point Wilson area is environmentally sensitive. It forms part of the Port Phillip Bay (Western Shoreline) and Bellarine Peninsula Ramsar Site as a wetland of international importance. The site is part of the Werribee and Avalon Important Bird Area, identified as such by BirdLife International because of its importance for wetland and waterbirds as well as orange-bellied parrots.

The area surrounding the jetty consists of salt marshes, a low basalt bluff, and shelly ridges. The environment is considered in good condition due to the lack of human disturbance. 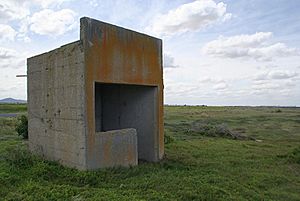 Disused bunker near the shoreline of Corio Bay

Point Wilson has been used as an explosives magazine since 1962, when the facility was relocated from the Altona explosives storage near Laverton. Owned by the Commonwealth of Australia, the Point Wilson Explosives Area is 326 hectares in size.

A 2,700 metre long steel and concrete jetty and wharf structure was constructed in the late 1950s for the importation of explosives. Four explosives storage and handling buildings were constructed in 1981. Commercial ships are used to transport ordnance and explosives from Europe and the United States to Australia, where they are offloaded at facilities including Point Wilson.

ICI proposed a chloralkali-based petrochemical complex for Point Wilson in the 1970s. This proposal did not succeed.

The Victorian State Government in 1994 proposed that the Coode Island bulk liquid chemical storage facility be relocated to the adjacent Point Lillias. The proposal was dropped in June 1997.

Point Wilson is the location of a Bureau of Meteorology weather station that opened in 1990.

Some of the shooting locations featured in the film Mad Max are on Point Wilson Road.

All content from Kiddle encyclopedia articles (including the article images and facts) can be freely used under Attribution-ShareAlike license, unless stated otherwise. Cite this article:
Point Wilson, Victoria Facts for Kids. Kiddle Encyclopedia.