The Western Treatment Plant (formerly the Metropolitan Sewage Farm or, more commonly, the Werribee Sewage Farm) is a 110 km2 (42 sq mi) sewage treatment plant in Cocoroc, Victoria, Australia, 30 km (19 mi) west of Melbourne's central business district, on the coast of Port Phillip Bay. It was completed in 1897 by the Melbourne and Metropolitan Board of Works (MMBW), and is currently operated by Melbourne Water. The plant's land is bordered by the Werribee River to the east, the Princes Freeway to the north, and Avalon Airport to the west. It forms part of the Port Phillip Bay (Western Shoreline) and Bellarine Peninsula Ramsar Site as a wetland of international importance. The Western Treatment Plant treats around 50% of Melbourne's sewage – about 485 ML per day - and generates almost 40,000 ML of recycled water a year. (The Eastern Treatment Plant treats 40%.)

The need for a solution

The discovery of gold in 1851 made Melbourne the richest city in the world at the time and thus, with a population of about 500,000 by the 1880s, also Australia's most populous.

Melbourne was facing a big pollution problem. While it had been described by British journalists as "a city of magnificent intentions", it was also being dubbed Marvellous 'Smellbourne' because of the city's unsanitary waste disposal methods.

In those early days the majority of waste from homes (including kitchen, bathroom, and laundry wastes, along with the contents of chamber pots) were emptied into open drains that flowed into street channels and on to local rivers and creeks. Waste from farms and industries also flowed into these street channels, turning Melbourne's rivers and creeks into open sewers, causing cholera and typhoid to run rife.

In 1888, a Royal Commission was formed to come up with a solution to Melbourne's waste problems. The Commission's findings led to an ambitious plan for the construction of a sewerage system - a system of pipes, sewers and drains built underground to carry sewage from homes and factories to a sewage treatment farm.

In 1892, the newly established Melbourne and Metropolitan Board of Works (MMBW) began buying land at Werribee, chosen for its low rainfall and suitable soils. Western Treatment Plant (then known as Werribee Farm) began operations in 1897.

Eminent British engineer James Mansergh was appointed to advise on a suitable system, while local engineer William Thwaites was ultimately responsible for the design and implementation of the system. At a time when most cities dumped their untreated wastes directly into rivers and the sea, Mansergh advised treatment of Melbourne's sewage by broad irrigation with a capacity large enough able to deal with the expansion in population expected over 50 years. The system he conceived and which was implemented in only slightly modified form began with a water closet at every property which delivered the sewage by gravity through a network of underground sewers of increasing diameter to a steam pumping station at Spotswood where it was forced up wrought iron rising mains to Brooklyn to begin its 25 kilometre journey along the Main Outfall Sewer to the sewage farm at Werribee.

The Main Outfall Sewer consists of a semicircular brick or concrete lined channel (in places arched over to form a circular tunnel with an earth covering) and three brick arched aqueducts. It runs for approximately 27 kilometres (16 miles) from the old pumping station in Spotswood (now part of Scienceworks Museum) to the Western Treatment Plant, spanning the suburbs of Brooklyn, Laverton North, Williams Landing, Hoppers Crossing and Werribee in the cities of Brimbank, Hobsons Bay and Wyndham.

The Main Outfall Sewer's function has now been entirely replaced by the more modern Western Trunk Sewer. The Main Outfall Sewer has been listed on the Victorian Heritage Register for being "of historical and scientific (engineering) significance to the State of Victoria."

In 1996, a Port Phillip Bay Environmental Study by the CSIRO found that Port Phillip Bay could be damaged if nitrogen loads entering its waters continued to increase, and thus recommended a reduction in nitrogen loads going into the bay. In 2004, Melbourne Water completed a $160 million upgrade of the plant to reduce nitrogen loads. Recycled water irrigation replaced sewage irrigation across the site. Land and grass filtration methods previously used were stopped.

Most of the Federation Trail, a major arterial pedestrian and bicycle path that runs for 23-kilometres from Werribee to Altona North, follows the heritage-listed Main Outfall Sewer.

"Greening the Pipeline" is a project aimed to transform approximately the pipeline into a 40-metre (43 yd) wide parkland in Melbourne's western suburbs to connect its communities. The pilot stage will be a 100m section in Williams Landing.

There are three modern lagoon systems at the Western Treatment Plant. A modern lagoon is typically made up of 10 large ponds, each of which can hold around 600 million litres of water. Sewage flows slowly through these ponds, allowing bacteria to break down the organic material. The water progressively becomes cleaner as it flows through each of the ponds. Two main types of ponds are used in lagoon treatment - anaerobic (without oxygen) and aerobic (with oxygen) - both producing different types of bacteria needed to break down the sewage.

Electricity from biogas and odour control

Using huge covers over the ponds, methane gas produced as a by-product of sewage treatment (known as biogas) is captured and turned into renewable energy. The Western Treatment Plant generates about 95% of its own annual electricity needs, and plans to become a net electricity exporter by June 2012.

Capturing and using biogas to generate electricity also means greenhouse gas and odour emissions are significantly reduced. Around 90% of odour emissions from the Western Treatment Plant have been cut since the first methane covers were installed in 1992.

The remaining treated effluent is discharged into Port Phillip Bay under an accredited EPA Victoria licence. 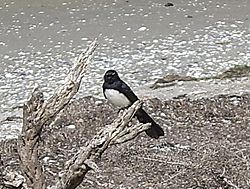 In 1921 parts of Port Phillip Bay and Bellarine Peninsula including the Western Treatment Plant were declared a sanctuary for native animals. In 1983 the plant was declared a Ramsar site, internationally recognised for its wetland habitat especially for waterfowl.

The Western Treatment Plant is one of Australia's best-known sites for recreational birding, with about 270 species of birds recorded there. On the south-western boundary lies the 1550 ha Murtcaim Wildlife Area, containing one of the last unmodified areas of saltmarsh on Port Phillip. The sewage treatment lagoons, Lake Borrie, creeks, saltmarsh, and coast host large numbers of sedentary and migratory waterbirds and waders. It adjoins the Spit Nature Conservation Reserve and is one of the few wintering sites for the critically endangered orange-bellied parrot. Access to the Western Treatment Plant for birdwatching is by permit only; permits can be obtained from Melbourne Water. The site is part of the Werribee and Avalon Important Bird Area, identified as such by BirdLife International because of its importance for waterbirds as well as for orange-bellied parrots.

All content from Kiddle encyclopedia articles (including the article images and facts) can be freely used under Attribution-ShareAlike license, unless stated otherwise. Cite this article:
Western Treatment Plant Facts for Kids. Kiddle Encyclopedia.