A bicycle path is a way marked for people on bicycles to use.

Many bicycle path networks can be found in countries such as Denmark or Netherlands, which has had a national system of cycle routes since 1993. These networks may use routes dedicated exclusively to cycle traffic or minor rural roads whose use is otherwise restricted to local motor traffic and agricultural machinery. A safe way to go on a bicycle is when you have a bicycle path. These are made in places where bicycle safety is given consideration, so you do not have to cycle in busy traffic on dangerous roads

The Dutch word Fietspad means Bicycle Path in English. In the Netherlands you can go on the bicycle path to the shops, housing, stations, schools, and workplaces. 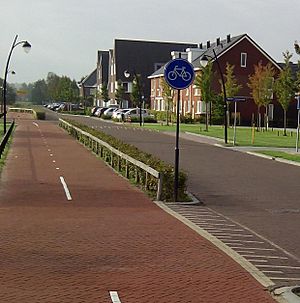 This Fietspad or Bicycle Path is in the Netherlands safely linking housing.

The more sensible approach is based on efforts to increase Utility cycling. In countries like Denmark, the Netherlands and Germany the high levels of utility cycling also includes shopping trips e.g. 9% of all shopping trips in Germany are by bicycle.

All content from Kiddle encyclopedia articles (including the article images and facts) can be freely used under Attribution-ShareAlike license, unless stated otherwise. Cite this article:
Bicycle path Facts for Kids. Kiddle Encyclopedia.