Pokémon Red (ポケットモンスター 赤, Poketto Monsutā Aka, "Pocket Monsters Red") and Pokémon Blue (ポケットモンスター 青, Poketto Monsutā Ao, "Pocket Monsters Blue"), released in Japan as Pokémon Red and Pokémon Green (ポケットモンスター 緑, Poketto Monsutā Midori, "Pocket Monsters Green"), are two role-playing games. They were made by Game Freak and published by Nintendo, and are the first two video games in the Pokémon series. They were first released for the Game Boy in Japan in 1996. They were later released to the rest of the world in 1998 (North America) and 1999 (Europe and Australia). Pokémon Yellow, a special version, was released one year later in each region. These three games (Pokémon Red, Blue, and Yellow) and Pokémon Stadium make up the first generation of Pokémon video game series. Pokémon Red and Blue have later been remade for the Game Boy Advance as Pokémon FireRed and LeafGreen, released in 2004. 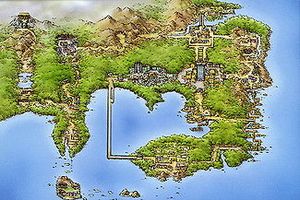 Pokémon Red and Blue take place in the Kanto region, based on Japan's real Kantō region.

The games are set in the fantasy world of Kanto and follow the adventure of the main character, Red, in his quest to learn Pokémon battling. Both games have almost the same plot, but the player must trade among the two in order to complete the games' Pokédex. The Kanto Saga of the Pokémon anime is based on the games' plots.

Pokémon Yellow, a special version, was released one year later in each region. Pokémon Red and Blue have later been remade for the Game Boy Advance as Pokémon FireRed and LeafGreen, released in 2004.

Pokémon Red and Blue got good reviews, and their releases started the beginning of what would become a multi-billion dollar company, both selling millions of copies around the world.

All content from Kiddle encyclopedia articles (including the article images and facts) can be freely used under Attribution-ShareAlike license, unless stated otherwise. Cite this article:
Pokémon Red and Blue Facts for Kids. Kiddle Encyclopedia.