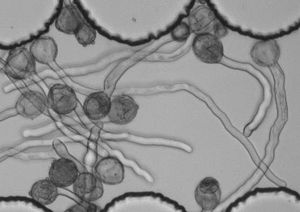 Pollen tubes growing from pollen grains (as seen under a microscope)

The pollen tube is the tube through which sperm from the pollen reaches the egg cell, and fertilises the plant to form seeds.

The pollen tube of most seed plants acts as a passageway. It transports sperm cells from the pollen grain, from the stigma (in flowering plants) to the ovules at the base of the pistil. Like ferns, other basal land plants, and many algae, some gymnosperms have flagellate sperm, which swim through a watery fluid to fertilize the egg cells.

Diagram showing the main parts of a mature flower

In angiosperms the pollen tube germinates from the pollen grain and grows the entire length through the stigma, style, ovary and ovules to reach the eggs. In maize, this single cell can grow longer than 12 inches to traverse the length of the pistil. The sperm cells by themselves are not motile and are carried within the tube. As the tip of the tube reaches an egg it bursts and releases two sperm cells leading to a double fertilization. One sperm unites with the egg cell to produce the embryo of a new plant, while a second sperm unites with the central cell (polar nuclei) to produce the endosperm of the seed. The endosperm is rich in starch, proteins and oils and is a major source of human food (e.g., wheat, barley, rye, oats, corn)

All content from Kiddle encyclopedia articles (including the article images and facts) can be freely used under Attribution-ShareAlike license, unless stated otherwise. Cite this article:
Pollen tube Facts for Kids. Kiddle Encyclopedia.