Kids Encyclopedia Facts
This page is about the village. For the adjacent town, see Port Edwards (town), Wisconsin. 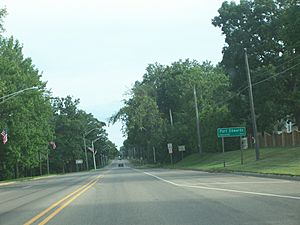 Port Edwards is a village in Wood County, Wisconsin, United States. The village is located northeast and adjacent to the Town of Port Edwards. The population was 1,818 at the 2010 census.

Port Edwards was known as "Frenchtown" until 1869, when it was renamed in honor of John Edwards, a local mill owner.

The settlement formed around a sawmill built about 1829. It was first owned by Messrs. Grignon and Merrill, who partnered in the mill for some time. It then passed on to Merrill and Whitney in 1836. In 1840 the mill was bought by John Edwards Sr. and his partner, Henry Clinton. It was then that the sawmill business, known as the Edwards and Clinton Company, began to prosper. The partnership didn't last. Because of Clinton's financial troubles, he had to transfer portions of his equity to Edwards throughout the years. By 1862 Edwards owned 100 percent of the business and changed the name to John Edwards and Company. A few years later, active management was given over to his son, John Jr. The senior Edwards died In 1871.

Mrs. Edwards wrote of the community in the 1860s, "the settlement was small only consisting of a store, a blacksmith shop, a school, two boarding houses and a number of white houses." With his success in the sawmill business, Edwards decided to run for the Wisconsin legislature as an assemblyman in 1890. After his election, he moved to Madison in 1891, leaving his business to be managed by his son-in-law, Lewis M. Alexander.

By the end of the 19th century most sawmills in central Wisconsin had gone out of business. Alexander decided to take a risk and convert the sawmill company into a paper mill company, completing the conversion in 1896. Although the change proved economically challenging, the company eventually succeeded, although it experienced ups and downs reflecting the overall economy.

With the town heavily dependent on the mill, it slowly grew to become the community it is today. Today the village consists of a small cluster of 1890s to 1940s homes that have been preserved and refurbished. Although the mill shut down in 2008, the village has not turned into a ghost-town. This little village still honors its past, naming the high school in honor of John Edwards. Lewis M. Alexander's house still stands and has been turned into the Alexander House Center for Art & History.

There were 711 households, of which 32.1% had children under the age of 18 living with them, 56.4% were married couples living together, 9.7% had a female householder with no husband present, 4.1% had a male householder with no wife present, and 29.8% were non-families. 24.9% of all households were made up of individuals, and 13.2% had someone living alone who was 65 years of age or older. The average household size was 2.45 and the average family size was 2.90.

Employment in Port Edwards has long been dominated by paper making. The primary employer, Domtar Inc., closed its mill in mid-2008.

All content from Kiddle encyclopedia articles (including the article images and facts) can be freely used under Attribution-ShareAlike license, unless stated otherwise. Cite this article:
Port Edwards, Wisconsin Facts for Kids. Kiddle Encyclopedia.