It is native to North America, where it grows in moist habitat in many regions, in Alaska to Greenland, the Pacific Northwest and the Rocky Mountains, and from California to New Mexico.

This cinquefoil is a dominant plant in association with the grass Festuca idahoensis on the alpine slopes of mountainous western Montana and central Idaho. 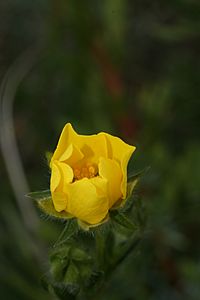 Potentilla diversifolia has gray-green leaves divided into usually five leaflets, which are mostly hairless and are deeply lobed or have teeth along their distal margins. Most of the leaves are low on the stem, with smaller ones occurring above. The inflorescence is a cyme of several flowers. Each has a small corolla of yellow petals above a calyx of five pointed sepals and five narrower bractlets.

There are three Potentilla diversifolia varieties:

All content from Kiddle encyclopedia articles (including the article images and facts) can be freely used under Attribution-ShareAlike license, unless stated otherwise. Cite this article:
Potentilla diversifolia Facts for Kids. Kiddle Encyclopedia.