Electric power transmission with underground cable. Here (1) is the conductor for heavy currents and (3) the insulation for high voltages.
For more details, see high-voltage cable

Power transmission is the movement of energy from its place of generation to a place where it can be used for work.

Since the development of technology, Transmission and storage systems have been of immense interest to technologists and technology users. 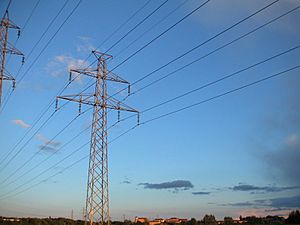 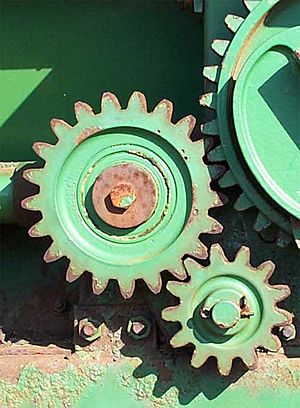 Mechanical power may be transmitted directly using a solid structure such as a driveshaft; transmission gears can adjust the amount of torque or force vs. speed in much the same way an electrical transformer adjusts voltage vs current.

All content from Kiddle encyclopedia articles (including the article images and facts) can be freely used under Attribution-ShareAlike license, unless stated otherwise. Cite this article:
Power transmission Facts for Kids. Kiddle Encyclopedia.