Prairie City is a city in Jasper County, Iowa, United States. The population was 1,700 at the time of the 2020 census. It is twenty-two miles east of Des Moines.

Prairie City was founded by James Elliot in 1856, for whom it was originally named; it was later changed because there was already another Elliot in the state. The first resident was William Means, who built a tavern 2 miles (3.2 km) west of Elliot's cabin. The railroad first came through Prairie City in 1866. The first school in Prairie City was built on 1868(The Plainsmen) ; the city's district remained independent until a merger with that of Monroe in 1990, brought about by the destruction by fire of Monroe's high school. The new school district is called Prairie City-Monroe ("PCM") Community School district, home of the PCM Mustangs.

Prairie City's Historical Society was established in 1995. The Prairie City Historical Museum is located at 109 S. Main Street and open by appointment. Many artifacts from Prairie City's history are housed in the museum including the Dowden Potato Digger, which was originally manufactured in Prairie City.

The city was the subject of Douglas Bauer's popular reminiscence of change in small town Iowa from the 1950s through the 1970s, Prairie City, Iowa: Three Seasons at Home.

According to the United States Census Bureau, the city has a total area of 1.21 square miles (3.13 km2), all of it land.

There were 631 households, of which 39.6% had children under the age of 18 living with them, 58.3% were married couples living together, 11.4% had a female householder with no husband present, 4.4% had a male householder with no wife present, and 25.8% were non-families. 22.3% of all households were made up of individuals, and 10.6% had someone living alone who was 65 years of age or older. The average household size was 2.61 and the average family size was 3.07. 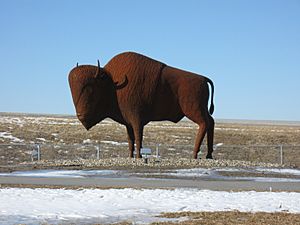 The Neal Smith National Wildlife Refuge, located adjacent to the city, includes 5,500 acres (22 km2) of land that has been restored to Iowa's original rolling hills and tall grass prairies, plus several miles of surfaced trails, an auto tour, and the Prairie Learning Center.

Prairie City has a number of parks which include sports facilities, playgrounds, and open areas.

Prairie City is accessible from the east and west via Highway 163. Highway 117 and County Route S6G allow access from the north and south respectively.

All content from Kiddle encyclopedia articles (including the article images and facts) can be freely used under Attribution-ShareAlike license, unless stated otherwise. Cite this article:
Prairie City, Iowa Facts for Kids. Kiddle Encyclopedia.