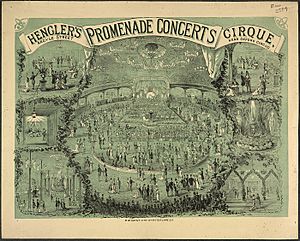 A c. 1880 poster for promenade concerts at Hengler's Circus, on the site of the present-day London Palladium

This article is about concerts in the parks in London in the 18th and 19th centuries. For the Promenade Concerts in the Royal Albert Hall see BBC Proms.

The word Promenade Concert today usually refers to one of the concerts in the series started by Henry Wood in 1895, known today as the BBC Proms. However, before these concerts started there had for many years been promenade concerts in the parks of London. These concerts took place in the leisure gardens (parks) where people could walk about while listening to the music (French se promener = to walk).

People had to pay to go into the leisure gardens. There were lots of entertainments there, e.g. fireworks, dancing, acrobatics and music. The music was played by orchestras. Sometimes these orchestras played in bandstands, sometimes in proper buildings.

Vauxhall Gardens and Ranelagh Gardens were the most famous of these gardens. The composer George Frideric Handel had his music played there in the 18th century. The gardens were very fashionable until the 19th century. Aristocratic people, royalty and ordinary people all mixed there. Handel's Music for the Royal Fireworks was performed in Vauxhall Gardens to celebrate the Treaty of Aix-la-Chapelle. The composer Dr Thomas Arne was appointed composer of Vauxhall Gardens in 1745. It was here that many of his songs became popular, including Rule Britannia. Wolfgang Amadeus Mozart and Joseph Haydn performed in Ranelagh Gardens on their visits to London.

In the 19th century concerts of classical music became very popular. The conductor Louis Antoine Jullien conducted many concerts. His orchestra were even joined by the bands of the Royal Artillery or drummers from the French National Guard. Concerts were also given in Crystal Palace, the huge glass building which was built for the Great Exhibition in 1851.

Many English composers had their music played in these parks. The music was often long songs (ballads), or drinking songs. Sometimes choirs sang choruses from oratorios by Handel. Later in the 19th century the programmes included more music by famous composers such as Brahms, Liszt, Mendelssohn, Schubert, Schumann, Smetana and Wagner.

In 1895 Henry Wood started his series of promenade concerts. He wanted to educate audiences so that they liked good music. This series of concerts continues today in the Royal Albert Hall as the BBC Proms.

All content from Kiddle encyclopedia articles (including the article images and facts) can be freely used under Attribution-ShareAlike license, unless stated otherwise. Cite this article:
Promenade concert Facts for Kids. Kiddle Encyclopedia.