Prunus americana, commonly called the American plum, wild plum, or Marshall's large yellow sweet plum, is a species of Prunus native to North America from Saskatchewan and Idaho south to New Mexico and east to Québec, Maine and Florida.

Prunus americana has often been planted outside its native range and sometimes escapes cultivation. It is commonly confused with the Canada plum (Prunus nigra), although the fruit is smaller and rounder and bright red as opposed to yellow. Many cultivated varieties have been derived from this species. It forms an excellent stock upon which to graft the domestic plum. 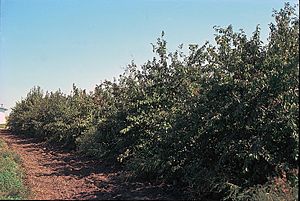 The American plum grows as a large shrub or small tree, reaching up to 15 feet (4.6 m). It is adapted to coarse- and medium-textured soils, but not to fine soils (silt or clay). The shrub is winter-hardy, but has little tolerance for shade, drought, or fire. Its growth is most active in spring and summer; it blooms in midspring. It propagates naturally by seed, expanding as a stand relatively slowly, due to its long time to maturity when grown from seed.

The roots are shallow, widely spread, and send up suckers. The numerous stems per plant become scaly with age. The tree has a broad crown. The branches are thorny. The leaves are alternately arranged, with an oval shape. The leaf length is usually 2–4 in (5.1–10.2 cm) long. The upper surface of the leaf is dark green; the underside is smooth and pale. The small white flowers with five petals occur singly or in clusters in the leaf axils. The globular fruits are about 1 in (2.5 cm) in diameter.

In cultivation, many crosses have been made between American plum and other Prunus species, including Prunus persica, the peach.

The American plum is used for both ornamental and culinary purposes. The white flowers are decorative in spring and its short, single leader makes it a popular residential landscape tree. Sargent says of it: "As an ornamental plant P. americana has real value; the long wand-like branches form a wide, graceful head which is handsome in winter and in spring is covered with masses of pure white flowers followed by ample bright foliage and abundant showy fruit." More than 200 forms of American plum have been grown for cultivation. The sour and sweet fruit is eaten fresh and is processed as preserves, jellies, jam and wine.

Farms use medium to tall shrubs or trees for windbreaks, and highway or riverside plantings. Its high density of growth effectively reduces the wind velocity near the ground. Development of suckers from the root system makes American plum effective in stabilizing stream banks and gullies. It will tolerate several days of flooding. Some commercial properties plant the trees along the entrance road.

Many birds and animals eat the fruit, and both white-tailed deer and mule deer feed on twigs and leaves.

The Plains Indians and Cheyenne ate the plums; the latter used the branches for the Sun Dance. The Navajo used the roots to make a red dye.

American plums are described in Laura Ingalls Wilder's On the Banks of Plum Creek (1937):

Laura learned exactly how to shake a plum tree. She held its scaling-rough bole and shook it, one quick, gentle shake. Every plum swung on its stem and all around her they fell pattering. Then one more jerk while the plums were swinging, and the last ripe ones fell plum-plump! plum-plump! plump! plump!

There were many kinds of plums. When the red ones were all picked, the yellow ones were ripe. Then the blue ones. The largest of all were the very last. They were the frost plums, that would not ripen until after frost.

All content from Kiddle encyclopedia articles (including the article images and facts) can be freely used under Attribution-ShareAlike license, unless stated otherwise. Cite this article:
Prunus americana Facts for Kids. Kiddle Encyclopedia.