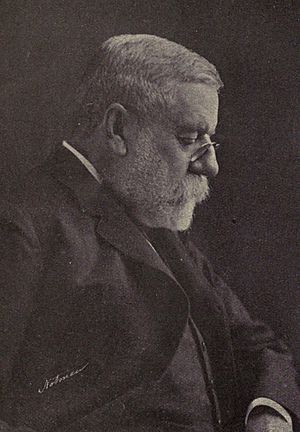 Charles Sprague Sargent (April 24, 1841 – March 22, 1927) was an American botanist. He was appointed in 1872 as the first director of Harvard University's Arnold Arboretum in Boston, Massachusetts, and held the post until his death. He published several works of botany. The standard botanical author abbreviation Sarg. is applied to plants he identified.

Sargent was the second son of Henrietta (Gray) and Ignatius Sargent, a Boston merchant and banker who grew wealthy on railroad investments. He grew up on his father's 130-acre (53-ha) estate in Brookline, Massachusetts.

He attended Harvard College, where he graduated in Biology in the class of 1862. Sargent enlisted in the Union Army later that year, saw service in Louisiana during the American Civil War, and was mustered out in 1865. He traveled in Europe and Asia for three years.

Having returned to his family's Brookline estate, "Holmlea", Sargent took over its management as a horticulturist, influenced by his cousin Henry Winthrop Sargent and H. H. Hunnewell of Wellesley. Under his direction, the family estate became a landscape without flower beds or geometric arrangements, but rather a recreation of nature with winding lanes, overhanging branches, and a profusion of trees and shrubbery.

When in 1872 Harvard University decided to establish an arboretum, Prof. Francis Parkman, at that time a professor of horticulture at Harvard's recently established Bussey Institution, probably suggested his young neighbor Sargent for the position. By the end of 1872, Sargent became the first Director of the Arnold Arboretum, a post he held until his death. He was also Director of the Botanic Garden in Cambridge.

On November 26, 1873, Sargent married Mary Allen Robeson (1853–1919). They had two sons and three daughters, one of whom married the architect Guy Lowell. Their son Charles S. Sargent went to New York, where he became a partner in a securities firm. 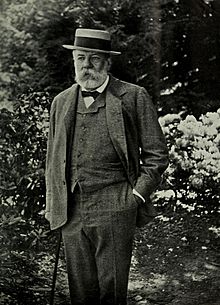 Even by the standards of Boston society of the early 20th century, Charles Sprague Sargent was unusual. He was colder than the surrounding, and notoriously chilly, Boston society; had nothing to do with local government; and cared little for the social ills of his era. He concentrated on his arboretum, and always was at work during his waking hours. At the arboretum he worked with Frederick Law Olmsted, of the Olmsted Brothers, from master planning for the roads and plant collections, to small details such as the selection of tree plantings on Commonwealth Avenue.

In this career, Sargent came of age as a dendrologist and published extensively. His influence was felt nationally on the conservation of American forests (in particular the Catskills and Adirondacks). He was a member of the National Forest Commission (1896–97) under President Grover Cleveland, advising on the creation of 21 million acres of national forest reserves. In that position, he clashed with Gifford Pinchot: Sargent advocated for preserving the forests in a state of "wilderness", while Pinchot advocated for conserving the forests in a way that included sustainable, productive uses, including timber harvests. He was chairman of a commission to examine the Adirondack forests and devise measures for their preservation in 1885.

Sargent became professor of arboriculture at Harvard in 1879. He planned the Jesup Collection of North American Woods in the American Museum of Natural History of New York City in 1880.

In 1888 he became editor and general manager of the weekly Garden and Forest, "a journal of horticulture, landscape art, and forestry". Garden and Forest was published in 10 volumes from 1888 to 1897 before being discontinued. In 1919 the first issue of the Journal of the Arnold Arboretum was published with Sargent as the editor-in-chief.

He was awarded the Veitch Memorial Medal of the Royal Horticultural Society in 1896.

After Sargent's death in 1927, at an Arbor Day memorial ceremony, Massachusetts Governor Fuller planted a white spruce on the grounds of the Massachusetts State House in his memory, and noted:

Professor Sargent knew more about trees than any other living person. It would be hard to find anyone who did more to protect trees from the vandalism of those who do not appreciate the contribution that they make to the beauty and wealth of our nation.

All content from Kiddle encyclopedia articles (including the article images and facts) can be freely used under Attribution-ShareAlike license, unless stated otherwise. Cite this article:
Charles Sprague Sargent Facts for Kids. Kiddle Encyclopedia.