Pterostylis major is a plant in the orchid family Orchidaceae and is endemic to New South Wales where it grows on the Northern Tablelands. As with similar greenhoods, the flowering plants differ from those which are not flowering. The non-flowering plants have a rosette of leaves on a short stalk but the flowering plants lack a rosette and have up to eleven well-spaced, bright green flowers with darker stripes, on a flowering stem with stem leaves. 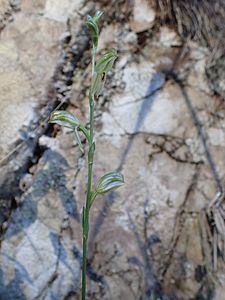 This species was first formally described in 2006 by David Jones and given the name Bunochilus major (although initially the orthographical variant Bunochilus majus). The description was published in the journal Australian Orchid Research from a specimen collected along the Point Lookout Road from the Waterfall Way. In 2010, Gary Backhouse changed the name to Pterostylis major. The specific epithet (major) is a Latin word meaning "large" or "great", referring to the larger size of this species compared to the similar Pterostylis longifolia.

Pterostylis major grows with grasses and shrubs in tall forest on the New England Tableland and south to the Barrington Tops.

All content from Kiddle encyclopedia articles (including the article images and facts) can be freely used under Attribution-ShareAlike license, unless stated otherwise. Cite this article:
Pterostylis major Facts for Kids. Kiddle Encyclopedia.