The Convention Center includes a 157,000-square-foot (14,600 m2) Exhibition Hall that can seat up to 16,965 people and a 39,500-square-foot (3,670 m2) ballroom that can accommodate up to 4,158 people. All in all, approximately 25,000 people can be accommodated within the center simultaneously and can handle conventions of organizations as large as 10,000 participants. The current PRCC general manager is Jorge Pérez.

The Center is operated by the Puerto Rico Convention Center District Authority, which also operates the José Miguel Agrelot Coliseum, also known as the "Choliseo", and the Government Reception Center, known as the Antiguo Casino de Puerto Rico, in Old San Juan, as well as the 113-acre district on which the Convention Center and the attached Sheraton hotel are located. Its current executive director is Omar Marrero.

The convention center is named after former Governor Pedro Rossello, who proposed and initiated the design, finance and construction of the structure.

After the hit from Hurricane Maria during the 2017 Atlantic hurricane season, events at the Puerto Rico Convention Center were cancelled from mid-September through the end of the year while the facility was used as a warehouse and collection center by the Puerto Rican Government to provide food, water and basic necessities to those affected by the deadliest and costliest hurricane in Puerto Rican history. The Convention Center re-opened in early 2018 and has been hosting a wide range of events since. Numerous improvements have been made around the convention center area as well, which offers hotels, restaurants, casinos and other amenities.

1994 - Governor Rosselló and Puerto Rico Tourism Company Executive Director Luis Fortuño announce the development of the Golden Triangle Project to be located in the Miramar section of Santurce, the old Isla Grande naval station and the Puerta de Tierra section of San Juan.

2010 - Gov. Luis Fortuño signs law naming center after his predecessor, Gov. Rosselló, and approves plan for District Live, an entertainment complex next to the center.

2015 - The PRCC celebrates its tenth anniversary and 4.7 million visitors. 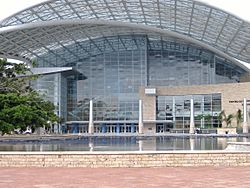 The Convention Center's design was inspired by the ocean. It has a signature roof imitating a wave, and the ocean theme continues throughout the facility, including details like its custom designed carpets and door pulls. 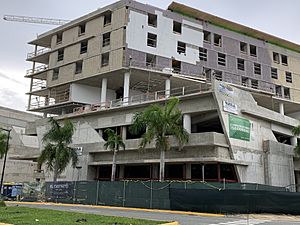 The PRCC is part of a planned Puerto Rico Convention Center District (master planned by Sasaki Associates). The main project is the Aloft hotel with 177 rooms, and a music hall which can seat 6,000 visitors, as well as a Caribbean cinema. The Puerto Rican government selected Starwood, under its Sheraton flag, to operate the reported $209 million facility, known as the Sheraton Puerto Rico Hotel & Casino. With these two hotels and others in the area, the district now has 1,762 hotel rooms available for visitors.

In recent years a number of projects have been under construction, including several restaurants and bars, an entertainment event venue known as El Distrito (formerly District Live!), a container park and the EcoExploratorio (an interactive museum and aquarium). Additionally, the Puerto Rico Film District composed by film studios and other features, including a university, is being built within the zone. 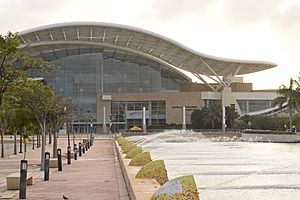 The facility can provide broadband and wireless Internet connectivity, video conferencing, and simultaneous language translations, among others throughout the center. All meeting rooms and ballrooms are equipped with Ethernet connection and capabilities. It also has a Business Center which assists business guests and attendees by providing computer and typewriter rental, printing, secretarial service, copying, fax transmission and receipt, package shipping, office products, and other services. A Central Security Office is located within the center. The Center also has inhouse catering, concessions and cleaning services for any and all activities.

All content from Kiddle encyclopedia articles (including the article images and facts) can be freely used under Attribution-ShareAlike license, unless stated otherwise. Cite this article:
Puerto Rico Convention Center Facts for Kids. Kiddle Encyclopedia.