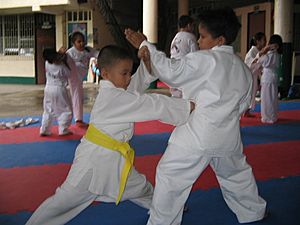 A karateka performing a 'reverse punch' or gyaku zuki

A punch is when a person puts their hand in a fist and thrusts it forward. This can be used for combat, or in some sports like boxing. Punch is the name of the blows that are thrown with the closed fist, striking, usually to other person, with the purpose of defence or attack.

The technique of the normal punch is performed closing the fist and striking with it. The fist is formed in a horizontal line along with the arm, being the element of usage of all the force performed the arm. There is other kind of punch in which the fist is placed vertically (with the palm of the hand directing towards a side instead of towards down) and directing slightly towards down in relation to the arm, in form where the fingers that blow are only the index finger and the ring finger. It is this latter the punch used usually in Kung-fu and the advised to person who had not had a proper training (because in this form it is much more difficult injury the wrist in case of doing it badly).

The punch is used, with different names and different techniques, in many martial arts, and also in systems of personal defence and attack without weapons, like in Tai-Jitsu.

All content from Kiddle encyclopedia articles (including the article images and facts) can be freely used under Attribution-ShareAlike license, unless stated otherwise. Cite this article:
Punch (strike) Facts for Kids. Kiddle Encyclopedia.