Quercus havardii (common names include shinnery oak, shin oak and Havard oak) is a deciduous, low-growing, thicket-forming shrub that occupies some two million to three million hectares (7,700 to 11,600 sq mi) in the southern Great Plains of North America. Clones may reach hundreds to thousands of years old, although aboveground stems typically live only 11 to 15 years. Shinnery oak stems are usually 1 to 2 m (3 ft 3 in to 6 ft 7 in) tall and codominate the plant community with mid- and tall-grasses which are usually taller than the oaks.

The specific epithet honors U.S. Army surgeon and botanist Valery Havard, who contributed much to the knowledge of southwestern plants. The word "shinnery" seems to be derived from chêne (French for oak), and not from the height of the plant.

Form: A low shrub to 2 m or occasionally a small tree, Q. havardii forms large clonal thickets by extending rhizomes through the sandy soil where it is usually found. Rhizomes range from 3–15 cm in diameter and are concentrated in upper 60 cm of soil, although penetration depths of 9 m has been reported. Lateral roots and woody rhizomes are widespread near the soil surface. Ninety percent or more of shinnery oak's biomass is under ground, and fortuitous root grafting is common. These underground stems commonly spread to form plants 3 to 15 m or more in diameter. Single clones are reported to cover up to 81 ha and to achieve ages over 13,000 years.

Flowers: Shinnery oak is monoecious with both female and male flowers borne separately on the same plant. Male catkins are densely flowered, 1.5-3.8 cm long, and hang downward. Female catkins are 3–7 mm long, contain 1 to 5 flowers, and are usually axillary on young shoots. Shinnery oaks are wind pollinated, and flowering occurs in the spring.

Foliage: The leathery, highly variable leaves are grey green to olive green, have a lustrous upper surface, and are whitish and densely hairy below. Leaves are alternate, simple, with variable shape (oblong, ovate, or elliptical), and with wavy or shallowly lobed margins. Length is 2 to 8 cm and width 2 to 4 cm.

Twigs: Twigs are brown or grayish, 1-2.5 mm diameter, glabrous or densely covered with short grayish or yellowish hairs, that are lost with age. Buds are dark red-brown, somewhat spherical, about 2 mm long, and sparsely pubescent.

Bark: Bark on the larger stems is light gray and scaly.

A majority of shinnery oak occurs on private land used for agriculture and/or livestock production. It is considered undesirable on grazing lands, because it competes with better livestock forage and its buds and leaves are toxic to cattle for several weeks in spring. In addition, where cotton is grown near shinnery oak, boll weevils overwinter in the oak litter and infest nearby cotton fields in spring. Thus, most research and other human effort concerning shinnery oak have been devoted to its eradication.

The use of chemical and mechanical control methods has been extensive, making it likely that shinnery oak's distribution is decreasing. Most authorities do not recommend complete eradication of shinnery oak, indicating that forage production is typically greater if some shinnery oak remains in the community. Stocking rates and rotational grazing patterns exist that reduce the incidence of shinnery oak poisoning of cattle. Excessive control of shinnery oak is controversial because it can open sandy soils to wind erosion and can conflict with wildlife-habitat quality. 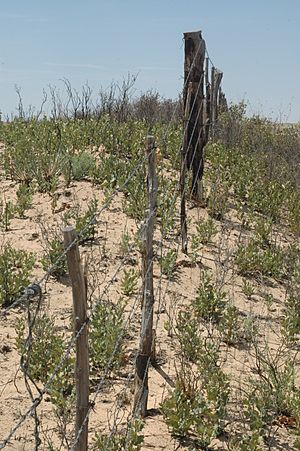 Shinnery oak provides rich habitat for wildlife compared with the surrounding shortgrass plains. Maintaining wildlife habitat and improving vegetation for livestock grazing are often in conflict, and should be carefully considered before undertaking control of shinnery oak.

All content from Kiddle encyclopedia articles (including the article images and facts) can be freely used under Attribution-ShareAlike license, unless stated otherwise. Cite this article:
Quercus havardii Facts for Kids. Kiddle Encyclopedia.