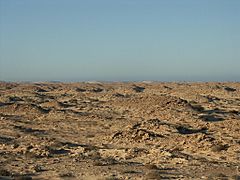 Desolate landscape terrain in the Río de Oro region, near the town of Guerguerat

Originally, Portuguese traders called the territory Rio do Ouro, they traded goods for gold dust, in the year 1442. They believed to be in Mali ruled by Mansa Musa. Mali was famed for its gold deposits, despite the fact that gold was never found there, and only further south in Akjoujt and south of the Niger River. Historic maps show a river running from the center of Africa to the Atlantic Ocean, newer maps show a shorter river which ends in a wadi named Megeta Mersug. In 1886, a Spanish expedition searched for this river, but did not find it.

All content from Kiddle encyclopedia articles (including the article images and facts) can be freely used under Attribution-ShareAlike license, unless stated otherwise. Cite this article:
Río de Oro Facts for Kids. Kiddle Encyclopedia.